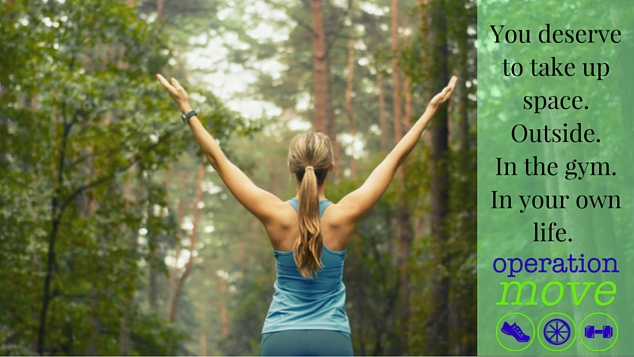 I always thought of myself as a wallpaper woman. I had the ability to disappear into the walls, well enough that no one would ever see me there. It starts off as a self-protection measure, and it slowly gets into every crack of your being and every moment of your existence. The irony is of course when I was at my biggest (in terms of weight), I was at my most desperate to be invisible.

On the days that I would go to the 24 hour gym and no one else was there, it was like Christmas to me. And when there were people there, well if you don’t make eye contact it could be almost as though you are invisible. Outside it was the same, if you just keep your head down, it’s almost like you aren’t there.

And eventually it works its way into other things as well, like how much your life is structured around making sure you don’t inconvenience anyone else. Almost as though if you contain yourself enough your existence never impinges on anyone else’s.

If you get small enough, it’s almost like you don’t even exist.

And I think that’s what learning to run has taught me slowly, and over and over again.

I deserve to take up space.

In my own life.

And you do too.

You have one life, don’t waste it being a wallpaper woman.