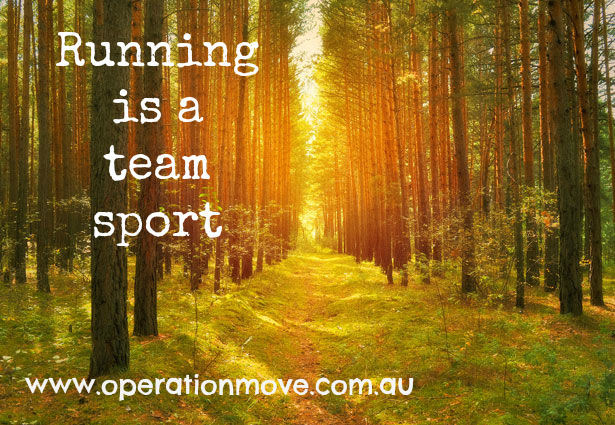 I was checking out my timehop the other day, as you do when you have heaps of stuff to do and therefore are in desperate need of procrastination and I found a run from last year. No photo to go with it, just the entry on strava, which I have to say is excessively odd.

Do you see that one thumbs up? On Strava that’s called Kudos, and the person who gave me kudos for that run was Kate. Now if we fast forward to a year later and I have this. You’ll notice there’s an instagram picture for this one. Much more familiar territory.

I can’t quite wrap my head around the fact that I can now run 21km in the time it used to take me to run 14km. Or the fact that in 9 months I’ve taken 30 minutes off my half marathon time. But the fact is I have had people holding my hand from the very beginning.

At first it was just Kate, but now it’s the community she created as well. In my world, running is a team sport. The team is what gets you out the door when you really don’t want to. The team is what gives you self belief when you are wavering. The team will encourage to do things that you are scared of and they will make sure you rest when you need it. And without the team I would never have gotten off the treadmill. I am certain of that.

And when you say to the team the idea of going out and holding a 5:10 pace for 21.1km makes me want to vomit, they will tell you that you will do it anyway. And you will do it anyway, because they told you that you would. And when you do achieve a goal, no one will cheer more loudly than them, because they know how much you worked for it and what it means.

I would struggle to remember the time I did for my first half marathon now. I know it was around 2:18 or something but I don’t actually remember what the time was. I do remember crossing the finish line holding Kate’s hand. Because that’s what meant something to me.

And now when I go out for a great run I know that if I take a cool picture Emily is the one who is going to appreciate it and if it’s hilly then Taz will understand the awesome.

I highly recommend a team for learning to run. They will propel you forward, they will keep you on track, they will cheer you harder than anyone else and one day you will look around and realise it’s not a team, it’s a family.

Register now for our next Learn to Run Course, beginning August 1.