Why is it that so many people find it so much harder to create habits to support nutrition, than they do for running. Don’t get me wrong, there is a reason why this isn’t called why running is so much easier than nutrition. Because it’s not easy, it’s bloody hard sometimes. Particularly in the beginning when you feel like a great thundering beast being slowly crushed into the ground through a combination of gravity and dying. It’s not easy. But it’s not as hard as nutrition for most people.

Going for a run, you might have to play the mental chess game. I will go. I’m not going. I can go tomorrow. Tomorrow you will just put it off again. You can go now. If you go now, I’ll buy you coffee afterwards. You get the idea. BUT it is only one part of your day and once it’s done it’s DONE. Nutrition on the other day is 24 hours a day and it’s so much harder to maintain focus for that amount of time. Have you ever noticed how you stick to whatever your nutrition plan is and then at the end of the day the mental effort has worn you done so you have a big slice of cake? That’s called decision fatigue. You’ve made so many choices about your nutrition all day, that you literally run out of will power at the end of the day. It’s also why they have chocolate in the check out aisle at the supermarket. Because you’ve exhausted yourself making all the decisions about your shop, so that snickers bar and that bottle of coke end up in your trolley at the end.

What I’ve discovered over the last year of really working on my nutrition is that preparation is EVERYTHING. A great week in running and in nutrition is built on the back of what I do on Sunday.

So this morning I made Chocolate Peanut Butter Protein Balls (slight variation from this recipe in that I left out the coconut flour and the cranberries and I used 1/4 cup of peanut butter instead of a 1/2 cup. You can play around with protein ball recipes because they are pretty forgiving. And I figured this way I would end up with something that was relatively high in protein, low in fat and without much added carbohydrates (so I can eat my carbohydrates in more delicious ways)

Next week I get back to a bit more of a normal week. Races are cool and all, but way too much resting and eating involved! So normal week means food prep and for me, I’ve got my go to breakfast of yoghurt and berries and muesli and I’m usually good to throw together a stir fry for lunch which makes enough for my dinner but snacks are the bit I need to have on hand. I’m a grazer, so it’s unusual for me to go they long without eating, so having snacks at the ready is a good way to make sure my nutrition stays on track. Protein Balls, done ✅ Baked custard is in the oven ✅ Who else is getting ready for an awesome week?

I also made overnight oats. For this one I added in frozen cherries instead of raspberries. You are probably noticing a trend here. I love recipes that I can play around with. So I’m sticking with what works for me, but I can change up the flavours so even though I am essentially eating the same thing, I don’t get bored of it because I’m always trying it different ways.

Made up some overnight oats last night to help me with busy mornings, which are aplenty around here! I mixed: 1 cup of rolled oats 1 cup of macadamia milk 1 cup frozen raspberries 4 tablespoons of peanut butter 2/3 cup Greek yoghurt And that made 4 servings. Had it for breakfast, and it was yum! Now I just have to wait for the coffee 😉

And I made Chocolate Cherry Baked Custard. This is a recipe I’ve been playing around with for awhile. 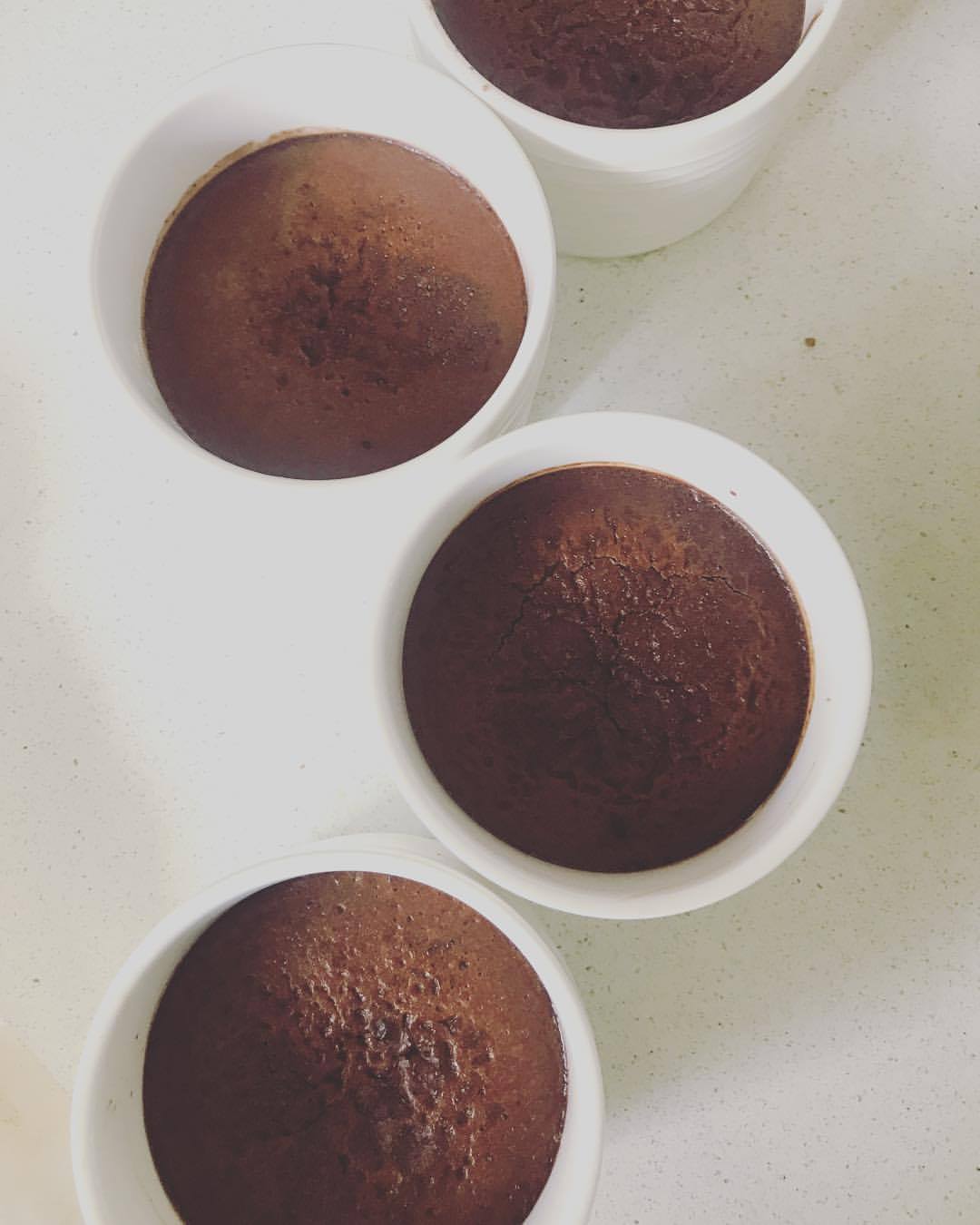 4 eggs
250g greek yoghurt
60g chocolate protein powder (you can ditch this if you like!)
1/4 cup cocoa

Then divide evenly between four ramekins and add in 1 cup of fruit of your choice (I tend to use raspberries or cherries). Sometimes if I want a smoother consistency, I’ll blend in the fruit and that works just as well.

Put your ramkeins in a water bath in the oven at about 170 degrees for 30 minutes. Because my oven is fan forced and over-enthusiastic I only need to have it at 150 degrees. The only tricky part about this recipe is not over-cooking them. It’s really easy for them to get rubbery and dry if you do, so it’s a great idea to take them out even a teensy bit before you are done.

I like them both warm and cold (really easy to reheat in the microwave if you like them warm) and tend to serve with a bit of yoghurt and fruit on top. 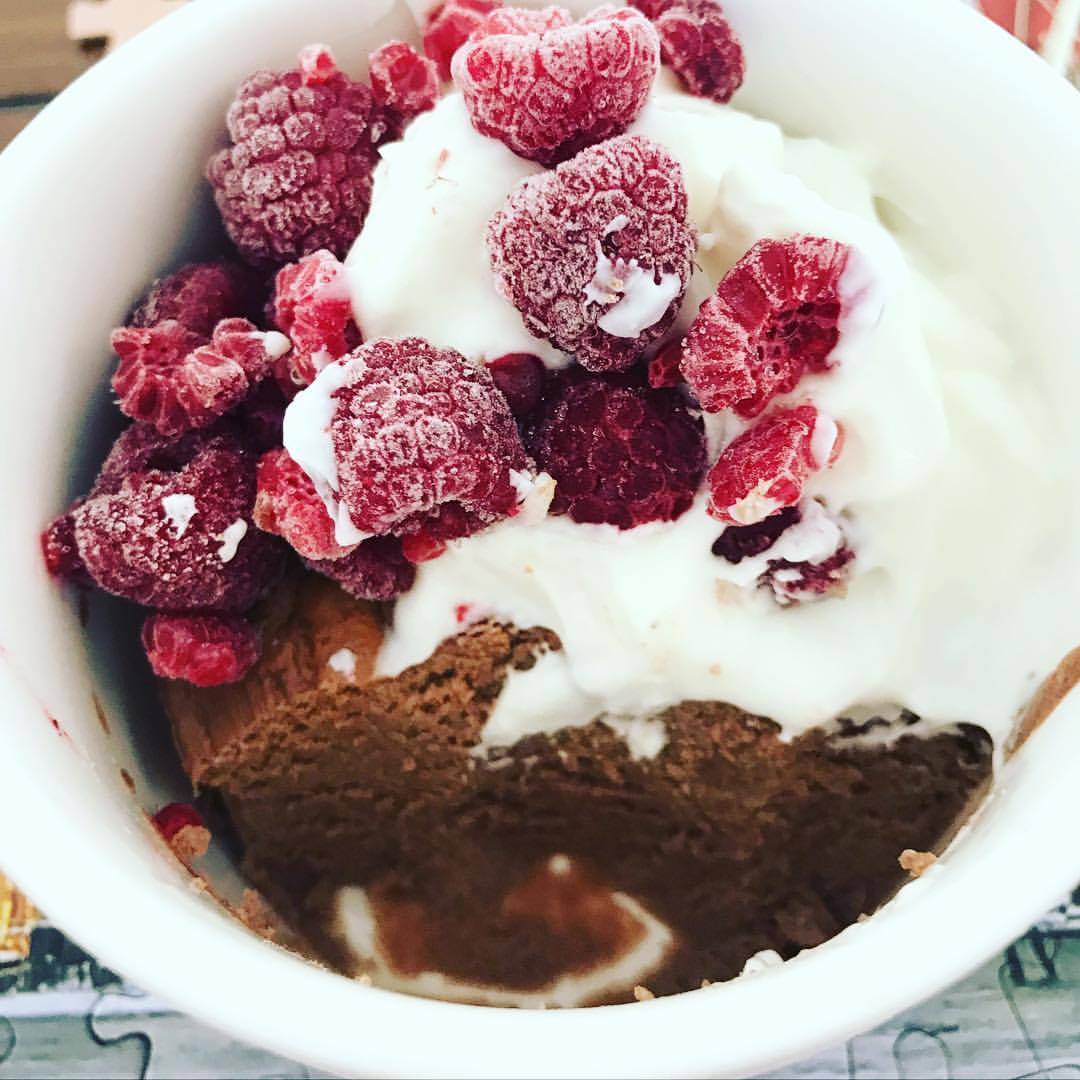 And really that preparation only took me maybe an hour. I was a bit longer in the kitchen today because the kids have a cupcake decorating competition on Wednesday and in the interest of my sanity I decided to make the cupcakes today so all we have to do on Tuesday is decorate them. But I ended up with 4 batches of overnight oats (1 for every day next week that I have an early start), 12 protein balls and 4 custards. And that’s a whole lot of decision making about breakfasts and snacks that I don’t have to make during the week.

The other thing that I do at the beginning of the day is I go and work out what I’m eating for that day. I know this sounds laborious. But it’s just another step that cuts out my decision making processes later in the day.

Once you are into the swing of having a food prep day it can be pretty fun, and something that you look forward to at the end of the week. It gives you a chance to try out new things and make it a priority to be looking after yourself during the week, even when you get busy. And on Monday night after you’ve just dragged yourself through the marathon that is child swimming lessons and you get home and open the fridge to find that baked custard waiting for you, it’s nice to know that someone was looking out for you.