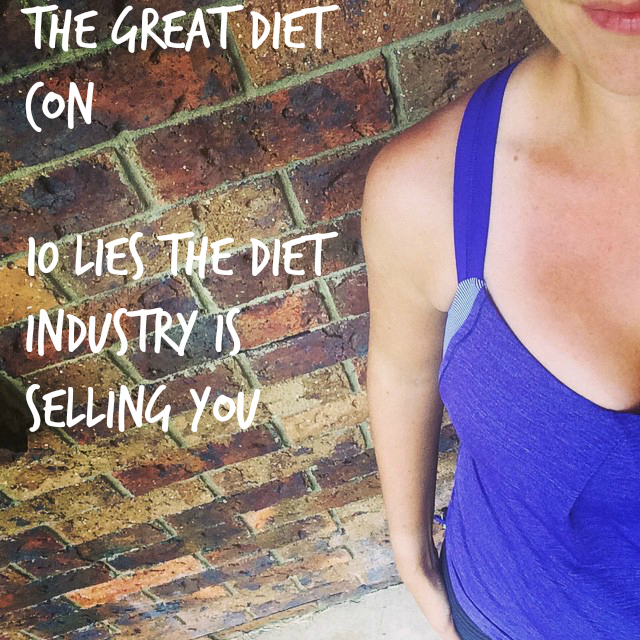 How many times have you heard someone say that a diet ‘worked’ but then later on they put the weight back on? Seems to me the diet didn’t work so well.

First Lie: Weight Loss is a Diet’s Success, Gaining the Weight is Your Failure

It’s kind of perfect isn’t it? If you lose the weight, the diet is proven effective, but if you put it back on it’s because of your own personal failure. But the reality is, for everyone who goes on a diet about 90% of them will not only put back on any weight they lose, they will put on a bit of extra weight as well. Diets are probably the only product you can sell to a consumer that doesn’t work but will still have them coming back for another round.

It sounds easy, but really you know it’s not true. Because to believe this you have to believe that all calories are created equal. And they can’t be. Because the fact is that eating a chocolate coated ice cream is not the same as eating a vegetable stir fry. But the calories say they are the same. And it’s just not true.

Third Lie: If you are slim, you are healthy

This isn’t exclusive to the diet industry. There is a pervasive belief that how you look is an indicator for how healthy you are. But the fact is that you can be slim and internally obese and you can be obese and internally fit. There is no real way of knowing how healthy or unhealthy you are based on how you look. But it’s convenient to sell you this idea because then you have to be a certain weight to achieve a certain health factor. But the reality is that generally health benefits are linked to activity level, not weight loss.

Fourth Lie: Fat is bad for you.

If you believe this then it might shock you to know that low-fat dairy is a risk factor for obesity. It destabilises blood sugar, which is a key factor in food cravings. Because low-fat foods tend not to taste as good they often have added sugar and are less satisfying so you eat more.

It can seem like a good goal when part of what you want is to lose weight, feel a bit more comfortable. But the thing is, when you achieve that goal you don’t have it anymore, so you lose incentive and you lose motivation and you put on weight because food is yummy. And guess what? Come back, here is another diet for you.

Unfortunately you can’t. Eating for weight loss and eating for training are two very different things with very different goals. And you probably can’t do both at the same time. If you eat for training you will probably have very gradual weight loss, but that is all. And you would only want it to be very gradual because otherwise you would not be physically capable of getting the most out of your training. And if you severely restrict calories you just aren’t going to have the energy to train.

Seventh Lie: You don’t need to lose weight to start your life.

Eighth Lie: The scales tell you what you need to know.

They don’t. They are probably the most inaccurate measure of where your body is at. They fluctuate based on hydration, what you ate, what you’ve had to drink, muscle composition and any manner of a million other things. So basing a set of goals based on that is a recipe for failure.

Ninth Lie: There is such a thing as ‘toning’

Tenth Lie: Shame will Motivate You

Shame will not motivate you. Self-loathing will not inspire change. There is nothing wrong with you. Your body is capable of so much more than you believe it is.

If you want change, you have to love the body you have right now for everything it has already done for you and everything it is capable of doing in the future. You have to respect it. And appreciate it. And you have to believe in it. Food and exercise are not reward and punishment. There is no punishment. And you are the reward, just like you always have been.

So where does that leave you?

I think over the four years since I had my youngest I’ve made a lot of changes and they stuck because I enjoyed them and because they were small and just built up over time. The other part was that I set goals that weren’t weight-based. They were things like run further or run faster. Things that were easy to measure as a matter of performance, not aesthetics.

There is nothing wrong with weight loss as a goal – plenty of us at any given time might think I’d feel a bit more comfortable if I lost a bit of weight and there is nothing wrong with that. But often it’s actually representative of a different goal it might be that we want more energy because we are feeling sluggish, or we want to be able to have more stamina to keep up with our kids or it might be that we want to run a little faster or have more confidence in ourselves. So my approach is that I focus on those things and everything else follows.

If you want to change, a diet is a setup for failure. Start by choosing the life you want and see where that leads you instead.