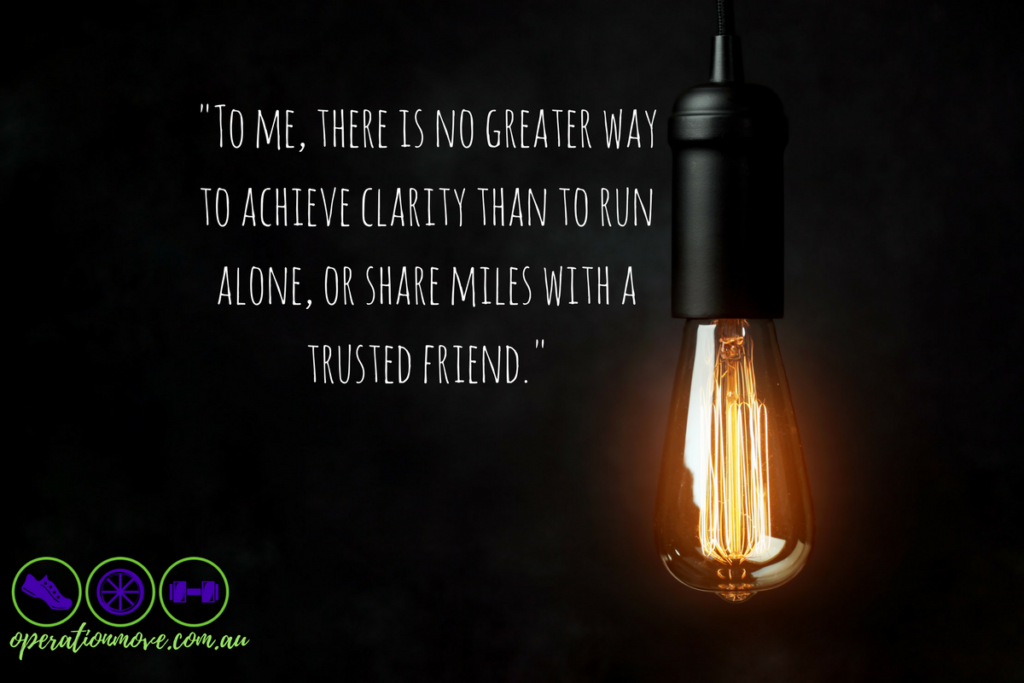 You know what my favourite moment was last year out of all of my runs and events? It wasn’t the most fun run I did, or the one with the best atmosphere, or the one that I was most proud of completing. It was this kind of ordinary moment that became because I had a moment of blindingly raw clarity. Funny how that happens isn’t it? Just trucking along in your life and all of a sudden it hits you. I think it’s shocking in some ways to have that flash of certainty, because I can go through life for the most part not being sure. There are so many decisions to make, and you kind of hope you make the right one, most of the time.  In some ways I tend to think being indecisive is an illusion. I usually know what the answer is, I just don’t always like it. But still, that moment that every fibre of your being knows is different to anything else.

There I was running down a road I’ve run many times, although this time it was in our local half marathon. People were spread out so I was for the most part on my own, except when I stopped at the water stations. I think I was musing about how I always think of it as flat, and it’s not at all. Which is a pretty common thought process to have on any run, really.  There was nothing unusual or special about that day and I was just doing my thing at my own pace. I love that part of running, where it becomes like a meditation and I’m present in the moment, but it also feels transcendent in some ways.

It was in that moment that I knew that the half marathon was my distance. It seems like a kind of insignificant thing for a moment of clarity when you say it like that. But I think when you look at how much time I spend running and coaching and what a huge part of my life it is, it’s not that surprising I guess. I’ve flirted with shorter distances and longer distances. And there were times when my ego convinced me I wanted to be a marathon runner. But that’s not who I am. And knowing who I was with certainty for even a moment was kind of liberating.

It’s a gift, to know. It’s easy to let that moment of clarity fade, if you let it. Now we are heading into the proper running season it would be easy to get drawn into how pretty a run looks or how epically challenging it would be or what an achievement something would be. But I sit and I remember that moment. How much like home it felt. How everything felt right and aligned in that space. And then I can make decisions based on the fact that I am a half marathon runner and that is who I am. There is a whole lot of beauty in that simplicity.

I was listening to a podcast this week where Dr John De Martini was being interviewed and he was talking about how everything falls into place if you build the architecture and framework of your life around your three core values and that what looks like self sabotage is really when people have a goal that isn’t aligned with something that is valuable to them. Sometimes it’s someone else’s value, or you think it’s your value but it’s really not. An example he gave was how most people think they want to be financially independent when what they really want is to spend money (pretty sure the spending money is me!) and so they continually fall short of the things that are going to lead to financial independence because it’s not actually something that they value. I tend to think that my moment was me recognising what my true values were.

So that week, I started half marathon training, and there was something exciting about being on my path again.

Previous Post: « Would you keep going if you were never going to improve?
Next Post: Meet a Mover: This One Time When Running Saved My Life »