You are here: Home / Archives for workout How do you prepare for that big workout, benchmark run or even a virtual race?

You might not want to do a full taper like you normally would, but you still want to give it the respect it deserves! This week I’m talking about:

A listener wanted to know how to use treadmills vs running outside. So I talked a bit about:

Sign up for the introductory 8 week program here, it’s free!

You can sign up here, just make sure that you tick the walking challenge box.

You can support Operation Move and the podcast on Patreon. I am so grateful for your support! In this week’s bonus episode, I’m talking about tempo running – why it doesn’t have to be scary, how it should feel and some ideas for a warm up to make everything a whole lot easier.

Our amazing community includes: You can sign up here. Stay up to date on: You can listen on iTunes, Spotify or Stitcher

I started doing Crossfit at the beginning of 2014. I don’t do New Years Resolutions because I figure if you really want to do something, you’ll just do it. So at the end of December 2013 I found a local gym that ran CrossFit classes and signed up.

I’ve heard people refer to Crossfit as a vortex of pain. And chances are if anyone tells someone doing Crossfit that they are batshit crazy, they will take it as a compliment. Just like any other type of fitness there is a gargantuan amount of fat shaming and just general grossness that goes along with some CrossFit inspiration out there. I suggest you avoid that.

But what is it?

Crossfit, at core is a perpetually changing mix of aerobic exercise, body weight exercises (things like push ups, squats, burpees, pull ups) and Olympic weight lifting performed at high intensity. Classes would generally include a warm-up, a skill development part, the high intensity ‘workout of the day’ (WOD) and a cool-down/stretch. It’s strength and conditioning designed to improve your muscular strength, endurance and flexibility.

Hell yes. I was used to running which didn’t involve doing exercise in front of other people who would realise I had no coordination skills whatsoever. I might have cried before I went in the first time thing because I get very socially anxious in those types of situations. But here’s the thing, regardless of what you might see on the internet about the hard-core nature of CrossFit, what a trainer at any gym will want for you is to be fit. You can’t be fit if you are injured. So they will adapt exercises, they will teach you and they will support you through the learning process.

What I love about it.

For someone who is used to endurance exercise of often two hours or more, the idea of going to a gym to do a WOD that will last for 20-30 minutes is actually really appealing. No matter how hard it is, it’s only 20 minutes. It works muscles that running doesn’t touch and I know the high intensity part of it is very different too. I have a different kind of muscle exhaustion at the end of it. And yes, I throw around the term ‘good pain’ a whole lot more.

What I get out of it

Even if you don’t want to do CrossFit I am a big advocate of strength workouts. I don’t have the discipline to do them at home on my own, but it’s really easy to do with hardly any equipment. A few things happen with strength workouts. The first is that it kicks up your metabolism so you can eat more or lose weight (whichever appeals to you). It will develop your endurance in cardio workouts. And the perpetual change associated with strength workouts has some huge benefits. If you are doing the same type of exercise all the time your body gets used to it, gets more efficient at it and burns less calories to get it done. Mixing up your regular workouts with something that is always changing means that your body can’t get used to it, can’t get lazy and will get more out of it as a result.

Crossfit advocates Paleo. Do you Paleo?

No I do not. I’m vegetarian for starters. Paleo knocks out dairy, grains and legumes. So right off the bat I’d lose all sources of protein. There is no way it would work for me. And even if I was a meat eater I would have serious doubts as to the health benefits of Paleo. You know what I do like? Moderation. So I have started eating less processed grains and replacing with vegetable carbohydrates instead and butter, lots of butter.

Now, it’s hard to attribute things to Crossfit because at the beginning of 2014 I quit smoking, quit drinking, increased my kms by about double and started going to Crossfit and I also started eating more healthy foods. But I had been wanting to lose some extra weight for awhile to get me to a better race weight come later in the year and in my first month I lost about 3kgs which was enough inspiration for me to keep going.

There’s usually no rhyme or reason to it. It just happens. Pops out of nowhere when you are least expecting it. You head off for a workout (or in my case a run) and it’s just freaking hard. Far harder than it should be. Feet like lead. Lungs at about ten percent capacity. And that ability that you take for granted, to be able to push through and find that magical next gear show up is just gone. 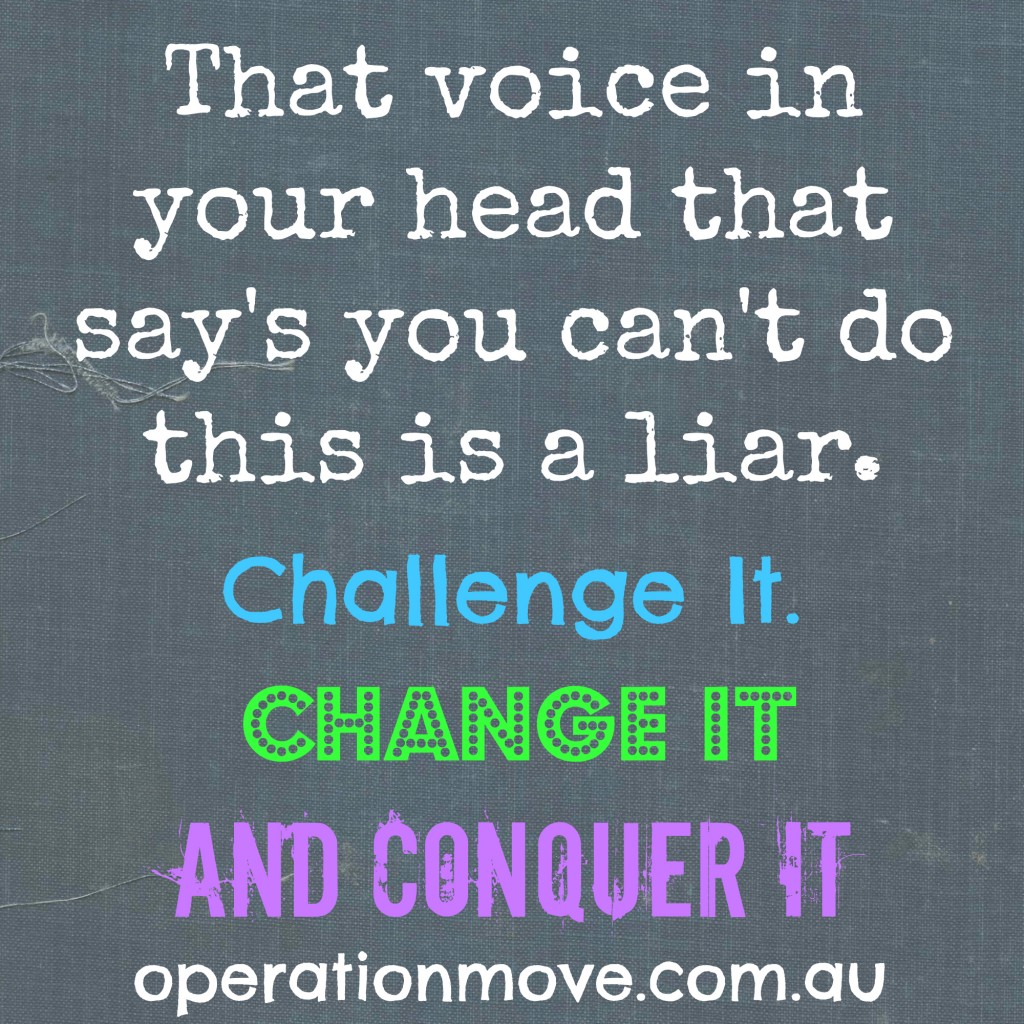 Who are you competing against?

Is it you? Because it should be. There’s no quicker way to make your workout feel like shit than comparing it to someone else. You are your best and only competition. Anything else is a distraction unworthy of your time. You know what you should compete against? Not your time last week or last month. But that voice in your head that says you can’t. That voice is excellent competition.

Stop looking at your time, pace or distance.

It’s ok. I’m a PB addict as well. I understand. But when you know you are not going to get there, let’s not having a glaring reminder of how much today is not the day. Get back to what you loved about it before their were times and records. Outside? That’s pretty awesome. There are beautiful skies and trees to look at. Sure you might occasionally have to leap over a dead snake or rabbit but mostly so pretty. If you have kids you will probably just enjoy being on your own because how often does that even happen?

Most things are intimidating if you look at them in total. If you break them up they suddenly seem more achievable. The other day I had a crossfit circuit that was 50 x squats, 7 dips, 7 chin ups and 10 power cleans with three rounds. Now if I’d looked at that in total I would have probably died. I mean 150 squats?! But it’s just a round. Anyone can do a round.

It is not a waste.

Don’t think because it’s incredibly hard, that it’s a waste and you might as well give up and try another day. It’s exactly the ability to keep pushing when you are mentally exhausted that is going to improve your speed, endurance and capabilities in the long run.

Measure a workout by the effort you put in.

Was it hard? Congratulations, you just did all you will ever need to do.

You made a commitment to yourself. Finish it. It doesn’t have to be fast, it doesn’t have to be stellar. You don’t even have to like it. You just have to finish. By any means at your disposal. And then you take that ability to finish and you use it the next time that voice in your head shows up. You proved that voice wrong once and you will do it again.

And once you’ve done all of that, talking to other people who totally get it goes a very, very long way.