You are here: Home / Archives for ambassador

Today we are so lucky to have Ness, one of our Operation Move ambassadors and Learn to Run mentors talking about her amazing experience running the 6 Foot Track Marathon. We are so proud of her! If you want to follow Ness on instagram – you can check her out here. And you can also find her in the Operation Move Community Group, which is a fun place to find out what the Operation Move Sisterhood is all about.

Here I sit looking back over the past week. This time last week I was en route to Katoomba to run in the Six Foot Track Marathon on the Saturday. The race goes from Katoomba out to Jenolan Caves. I wasn’t nervous, I just want to get there. I wasn’t nervous until I was driving up Mt Victoria and I realised that this was a big mountain range.

I started running over 10yrs ago. My partner was away a lot for work, I was working indoors all day and I needed something quicker than walking. I started and restarted the Couch to 5K plan (pity the Operation Move Learn to Run program wasn’t around then). I did a 5km race and was hooked. I’d aimed to one day run a marathon. I started training for the Melbourne Marathon, but my other interest, polocrosse, took over and my marathon dream took a back seat.

When I had Buster, I gave up running while pregnant. While I stayed active by walking and doing body weight exercises, I was so slow and clumsy that running was out of the question. After having him, I didn’t want to run as I was slow and it was like going back to learning to run.

At the end of 2014 I’d decided that I’d had enough. 2015 was going to be the year that I came back to running and I would do a half marathon. I set my goal – Gold Coast Half Marathon, I enlisted a coach – a local physio, we mapped out a plan of races and training all the way up to July 2015.

I did the Gold Coast Half Marathon and smashed my goal. I got to meet the lovely Zoey afterwards. I thoroughly enjoyed following other ladies journeys to the half and marathon at that event.

Then, it was onto our local half marathon, Dubbo Stampede. As I was running this, I wondered when I morphed into a runner who happily goes and runs for 2hrs even when underprepared. I was on a roll and thought why not do the Carcoar Marathon in November. Why not pick a tough marathon for your first? I finished it and in the process got my Six Foot Track qualifier.

The day entries opened I was at work. I didn’t think that I would get in given it sells out quickly. I went through the process and got the ‘congratulations, your entry has been successful’. My immediate thought was ‘oh shit what have I done’. I was entered in one of the toughest and most prestigious running events in the country. Right up until I started the race I expected someone to come along and say ‘sorry, we made a mistake, you’re not good enough to be here’.

I was fortunate enough to have a friend from Dubbo, Bec, doing it for her first time along with her twin, Lauren, who had done it once before. My coach was also running it, for the ninth time. He told me it was his favourite race. When he first said this I thought he was crazy, now I look back and I can appreciate that comment, it’s an awesome experience.

I had the best sleep the night before. I woke early. Ate my toast and avo and had a strong cup of tea. Showered and dressed. My parents woke early to see me off. They came up from Illabo to look after Buster for the day and I was so glad to have them there. I caught the bus from the high school to the start line. As it turns out, I sat next to the female winner and shared a few laughs with her. I am always amazed at the atmosphere of running events. Everyone was happy, chatty, excited, polite, so cheery for 5:30am!

We were there with plenty of time to chat, drinks cups of tea, queue for the loo, walk and most of all, see all the waves start, cause you get to do that when you start at the back. Still, I had no nerves, I was just excited.

When our gun went off at 7:35, I fell in with the group and off we went. There was a lot of downhill, we were walking single file down stairs. I was happy when this was over and the country opened up again as I’m clumsy at the best of times but when I can’t see the ground in front of me, I’m hopeless.Forgive me if the rest of the race report is a bit ‘blurry’ but it now seems like time went very quickly.

There were a lot of stiles over fences to navigate and I was worried I’d stumble. The trail down to Cox’s river was difficult but so much fun, I felt like a ninja! I was expecting the river crossing to be waist deep, not good when your short, but it wasn’t even hip high. Running with wet shoes and socks and sand in your shoes is a different experience.

Now for the hills. After the river we have the first big climb, to Mini Mini. There was a lot of walking. It was starting to heat up with no breeze. I was happy to get to the top and run again on the downside. 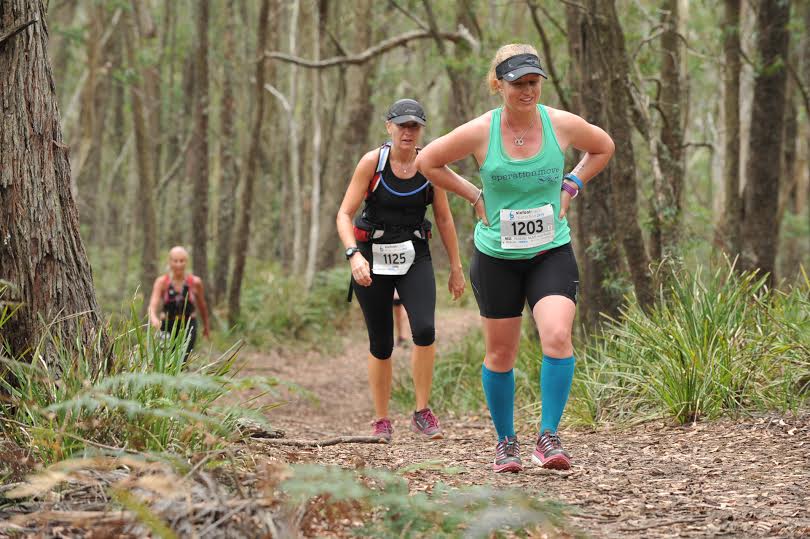 Enter the climb to the Pluviometer. It was long, steep, hard and hot. This is where my mind started to waiver. I was thinking that if I had walked for so long I’d never make it within the 7hr cut off, although I’d overtaken the 7hr sweepers for the 7:25 start group. I really started to think I wouldn’t make it. I chatted with a lot of other ‘walkers’ I jogged the downhill sections but still couldn’t shake the feeling. The 7:25am sweepers caught up, I almost cried, but they said they were ahead of time and would be stopping at the top of the Pluvi to cheer people on. I was back on track, it was like a switch flicked in my mind and I knew if I stayed ahead I’d be right. This was reinforced by a lovely lady who gave me some tips and what to expect for the rest of the course. I was so glad to see her at the end and thank her for this.

After the top of Pluvi (approx. 26km), its through Black Range which is up and down but a ‘road’ so the going is nice and you can pass and be passed without any issues. Still, I was walking a lot and having trouble getting running.

Another mental boost was reaching the 30km mark and knowing I only had 15km to go. Then getting to 35km and knowing I had 10km to go. There were some more great hills in that last 10km, just short ones of about 300-500m and they hurt but I just wanted to get it done and when I looked at my pace at some points in this part of the race I’m at 5:30-5:50min/km.

The trail got tough again with small boulders to navigate while going downhill trying to avoid doing and ankle or knee. My first glimpse of Caves House blew me away, it looked so far down. You could hear the cow bells and cheers echo up the valley. When we came out of the trails and the volunteers were cheering and saying ‘it’s OK Ness, you have 300m to go, with just that little hill (about 10m) to go’. I sprinted and yelled ‘this is not a hill’. Then it was downhill to the finish (I’m getting shivers and teary now thinking about it). I was teary then as I had no doubt I was going to finish this. As Zoey had said, this was my victory lap and I was determined to finish it strongly and smiling.

I came off the ramp and entered the finishing chute. I could hear my friends yelling my name. Everyone is cheering and ringing their finishers bell. I sprinted as best I could to the finish with a massive grin on my face. I had done it. I had finished the Six Foot Track. I had the medal to prove it. 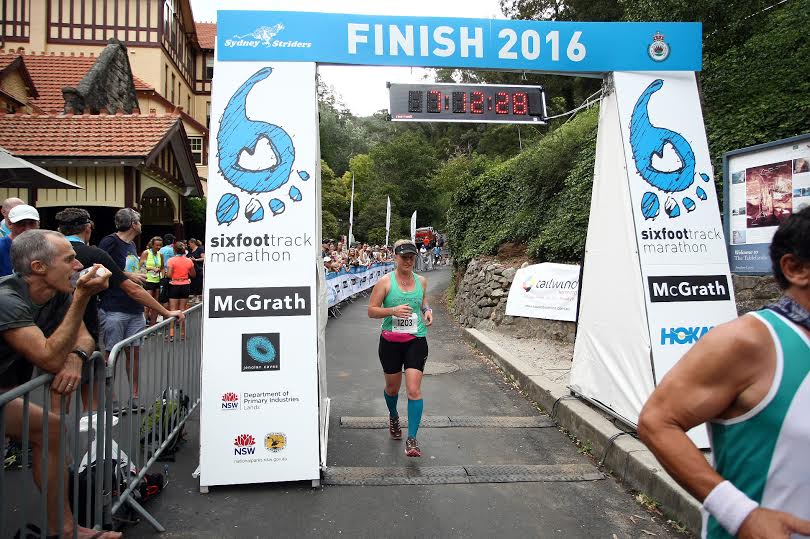 I’d completed it in 6hrs 37min, well ahead of the sweepers. I’ve never been so happy to take my shoes off. I had a well earned beer. Then for the ultimate insult – navigate stairs up to get my gear bag and back down, stairs after running 45km in the mountains, stairs!

I saw my coach who was thrilled that I’d finished. I saw a lady, Pinky, who I’d run with for a bit and had a chat with her. I finally found Bec & Lauren who both smashed it. My mum cried when I text her to let her know I’d finished.

The Six Foot Track Marathon is my favourite running memory ever. When I got the pictures, I was so happy to see that I was smiling in all the photos. Midway through the race I was ready to sell all my running gear but on the bus on the way back to Katoomba, we were planning next year!

I can’t thank everyone enough. Beautiful comments on various Facebook and Instagram posts helped me through times when my self-belief had left me. When my mind was giving up during the hills, something that kept me on track was the thought of disappointing all the people I had in my corner, they believed in me and I was not going to let them down.

I’ve never been more proud to be an Operation Move ambassador and community member than I was on that day. I wore that green shirt with so much pride.

Set your goals and make them so big that they scare you. Shout your goal out to the world. Surround yourself with people who believe in you as you’ll need them when you doubt yourself. You can achieve more than you could ever hope for if you have great people in your corner.

If you’d like to start your next big adventure we are accepting registrations for Learn to Run and Far and Fast Running Coaching. Claim your spot today.