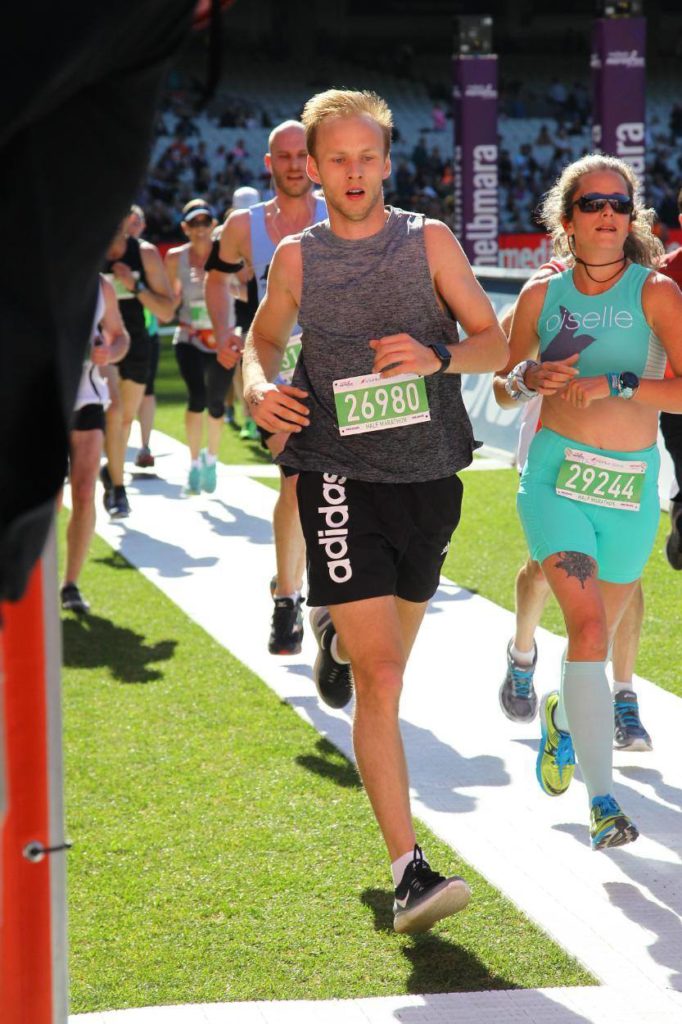 My favourite thing about this photo is that the pain of those last hard kilometres are over even though I haven’t crossed the line yet, because I know that I’ve already finished. It’s done.

Because pacing isn’t about discipline, it’s about how fast you think you can go.

The risk you take is that if you are overly-aggressive with pacing and rate your ability too highly, you can fall apart at the end. And if you don’t back yourself enough you can end up finishing strong but with a race that doesn’t truly represent what you are capable of. And I was willing to fail, really fail. I just wanted to know what I was capable of. Even if that meant blowing up in the middle. Even if it meant dragging myself through the last 8km. That would be a reasonable sacrifice for me to know what I could do, without hedging my bets on something safe.

As great as the tune up race had been a few weeks earlier, it had given me very little information to go on. I had more or less made my pacing for the day. But due to a less than ideal lead up, it gave me no indication that I was capable of anything more than the 1:46:30 I ran at the Gold Coast.

The safe bet would have been to pace for a 1:44 half marathon. A decent improvement on what I’d already done. Especially taking into account that Melbourne is not pancake flat like the Gold Coast and it can tend to be a bit warmer. But I just felt like I had more. And deep down 1:40 was my number. And I decided to go for it. If I thought about averaging 4:44 pace for 21km it was terrifying. Because frankly, it felt hard enough doing that for 6km. But you just have to trust that the training is one thing and a race is something else. When you need to dig deep, you will find another level. I took comfort in the predictor workouts I’d done in the last few weeks which did indicate I was capable of it, even if I didn’t really think I could do it.

So following my trusty negative split strategy for half marathons this was my goal for the race:

I tried not to look at it too hard, because it looked over-ambitious.

I was excited when I got to the last 3km and I couldn’t speed up, because I knew I had reached the entirety of what I could do that day, and that filled me with a kind of joy, that no time ever could. I knew how fast I could go. And I learnt that you usually have a whole lot more than you ever think you do.

Previous Post: « 6 Running Goals for 2018 That Aren’t Running a Marathon
Next Post: Do you need a rest day? »