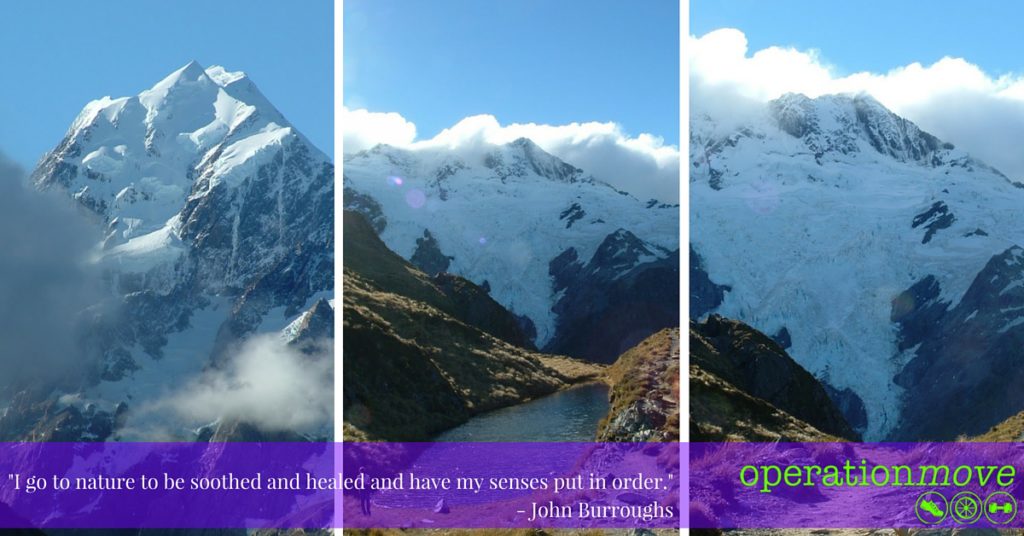 In 2004, I visited New Zealand. We spent a bit of time in the North Island, but most of our time in the South Island which I loved. It was probably my first experience of DOMS (delayed onset of muscle soreness) because we did so much hiking, got lost a few times and found our way back eventually.

When we got to Mount Cook, my travelling companion was a bit unwell so she stuck to the hostel room. And besides, she kind of hated the barrenness at the bottom of the mountain. But my reaction was completely the opposite and I went exploring. It was a stark picture at the bottom of the mountain but everything above was spectacular. I hiked a nearby mountain to get a better view of Mount Cook as high as I could up to the point where you would have needed climbing equipment to go further. My legs were a bit like jelly at that point so I was lucky to make it back down in one piece.

I left Mount Cook with a sense of wanting to come back to climb, but not really having any idea of how I would do that or how to train for it and I was convinced when I left New Zealand I would return home and do all sorts of hiking at home because I loved it so much.

But what happened when I got home was nothing. Which is so easy to do. I went back into the habits of what I would normally be doing, things that were well within my comfort zone. I never explored or tried to seek the peacefulness I’d found on top of the mountain. I kind of just accepted that. In hindsight it is miraculous to me that I did, because when I was on that Mountain I was so ready to change my life. But I didn’t. I just went home.

And then seven years passed before running came back into my life. Because I’d missed my moment and seven years seems like a long time but it’s not really. It would be ten years before I re-found my love of mountains. When people talk about wishing they’d found running earlier I kind of think I wouldn’t have had the discipline for it. But I’m not sure if that’s 100 percent true. I think I just struggled in between seeing what I wanted to do and not knowing how to get there and so I just defaulted to the norm. Instead of allowing that slide back into my day to day, I could have paid more attention and followed the path that inspiration was lighting up for me.

I still think about that mountain a lot though. As a place I’d never been, but felt completely at home with. The truth is I probably don’t know how much strength that experience has given me over the years and how much it probably gave me all those pushes forward out of my comfort zone when I did take up running.

So the next time you feel that pull out of your regular life and out of your comfort zone, don’t push it to one side. Let it stay front and centre. Even if that’s uncomfortable. Even if it means you have to change your entire life.