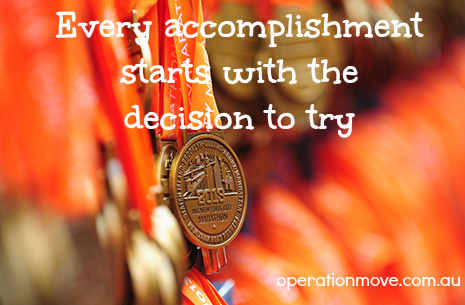 I am not a writer. I am not a blogger. I do like to read blogs – a few of you reading this have blogs that I very much enjoy! – but I’ve never felt that a) I had the time to write one (which is probably bullshit because all the blogs I read are written by people much busier than me) and b) I had anything particularly interesting to say. So I am finding this post both cathartic and nerve racking!

I’ve always been a relatively active person – played the standard sports like netball, basketball, softball, gone to the gym on a semi regular basis, danced my socks off til 4am – but never a runner. I was briefly in the school running team when I was about 14 and attempted a 3km run and nowhere near finished it. It really devastated me. Did I train for it? Of course not.  Because historically I have been a person who coasts through life. Most things have come easy to me. Because if they haven’t, I have quit. Don’t get me wrong, I am a hard worker at times (ask anyone who has ever employed me) but when it comes to something where I am responsible for motivating myself, I have never really excelled.  I’m a “do the bare minimum” kind of girl. I’m the one whose teachers wrote “Not reaching her full potential” in their report card. Must have driven my parents nuts.

Having children has changed things in a few key ways.  A week before my daughter was born (we were living in the UK at the time) we moved an hour away from the in laws to a town where I knew one person. One person.  Who does that? So here I was, in the middle of Winter, at home with a newborn, a 2 ½ year old and no car. There were no exercise options that worked.  I tried a class called “Kettle mummies” – a kettlebells class where you can bring your baby – and as much as I love kettlebells, my daughter thought otherwise and screamed the whole time. After I few weeks I couldn’t take it anymore, and I also felt guilty for distracting all the other mums (who somehow had angelic sleeping babies who never made a peep – I suspected drugs). It was a sad time for me and my body. I was lonely and felt very sluggish and unattractive. When Summer came I decided running was the answer. I could do it whenever suited the kids and husband. I didn’t need to fit into a gym schedule or spend money on classes I couldn’t attend. Although I didn’t instantly become hugely motivated (I partly blame the UK weather – worst summer for 100 years according to my mother-in-law, I think she blamed us) the seeds were sown.

The other change becoming a mother has caused in me is that my level of PATIENCE and DETERMINATION is so much higher than it has ever been. I can’t even begin to explain the change in that aspect of my personality. Those two character traits were definite weak points in my armour. But not anymore. When it comes to patience and determination, I am a new woman. I believe this has been key in my running journey.

When I returned to Australia earlier this year, I still wanted to run but it was mostly still a vague notion rather than a burning desire. As I said above, I can find it hard to motivate myself if there are no outside factors pushing me. A couple weeks after we returned, two good friends came around for a BBQ with their children. One half of this couple was Lee. I had really enjoyed following Lee’s blog while I was in the UK. I could really relate to a lot of her parenting issues and philosophies. I loved her honesty and her approach to life. During some of my most lonely times in the UK, reading her blog was something that I looked forward to so much as a connection to home and a promise that there was light at the end of the tunnel. And of course her running journey was something that I found really inspirational and interesting. We spoke about running (amongst other things, there may have also been much complaining about tiredness and whinging children) and she gave me a bit of a pep talk and told me about a facebook group she was part of which was very supportive, and said she would invite me to it. Which she did. That group was Operation Move. And it was the final piece in the puzzle. The final planet aligning. Because I had that outside motivation now. The group showed me what is possible if I believe in myself. There are people who are 6 months ahead of my moving journey. One year ahead. And longer. And there are people where I am now. And we’re all equal.  They provide me with advice when I need it. They give me support and congratulations. And I give it back. Yes they motivate me, but more than that, I now feel I have the ability to motivate myself because I can see in my results – and in the results of the other movers – that patience and determination does pay off.

I ran my first 5km in June. I ran my first 10km in August.  I recently ran 12km for the first time. I ran 10km for the Melbourne Marathon Festival – unfortunately when I entered I was very early on in my running journey and the thought of running 21km was actually incredibly scary. I was kicking myself later on because the half marathon  sold out and I could totally have done it. Lesson learned. 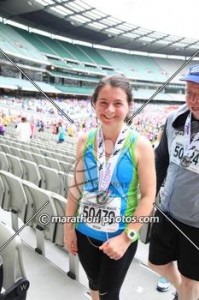