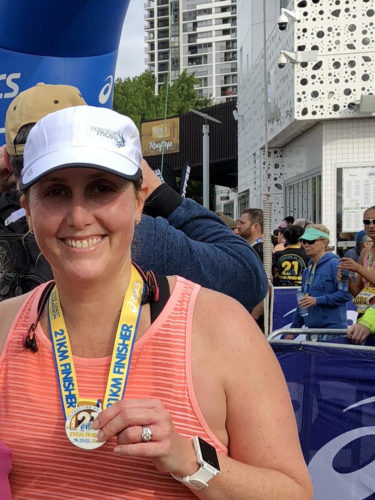 Tiffany completed Learn to Run in 2017 and has been a member of Run Club and the Operation Move Community since then. Tiffany originally shared her story in Run Club and it is reprinted here with her permission.

Sooo it is my turn to let you know about my running journey. I don’t think it is as inspirational as others but here goes….

I have always loved playing sport since I was young. I played state basketball and touch football, lifesaving and swimming. I did well at athletics mainly due to sprinting and jumping events. However any distance over 400m and cross country I hated so never classified myself as a runner but a sprinter. I have continued to play basketball, swim and go to the gym in my adult years but always hated going for a run!

In January of 2017 the Learn to Run program came up on my Facebook feed so I joined and loved my group! I then joined this awesome Run Club group after I finished. I always thought a 10 km run was my absolute limit, however I watched a friend of mine who had lost 30kg and survived breast cancer complete the Gold Coast marathon in under 4 hours in 2017. I was so inspired that I decided that I would do the GC half in 2018.

I love running as it makes me a nicer person, the post run feeling is like no other!! This group has been amazing and is teaching me that it is your own run, and it is amazing no matter how long it takes you to get there (which is hard for my competitive nature). I am thinking of doing Melbourne half in October and would love to do Great Ocean Road one year also. My aim is for two maybe 3 halfs a year but a marathon is not a goal for this sprinter…

I have to say thanks to Zoey and Kirsten! You both inspire me and thanks for creating an amazing supportive group of women!!!