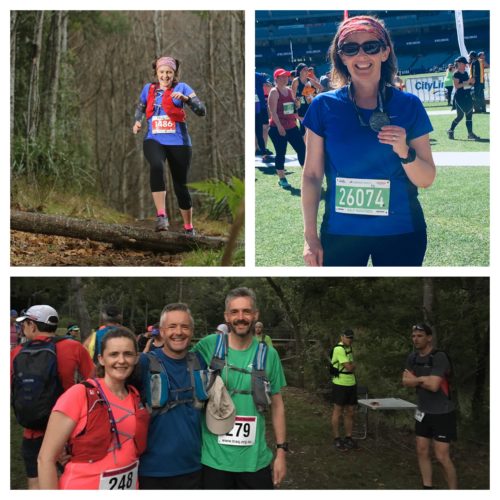 Jen completed Learn to Run in 2014 and is a valued member of Run Club and the Operation Move Community, she originally shared her story in Run Club and it is reprinted here with her permission. Dr Jen also writes a fantastic science blog, Espresso Science

When I was 16, I spent a year as an exchange student in Germany. I had the best time ever and could fill pages with my happy memories. But one of my strongest memories could have happened anywhere. Before that, I had occasionally jogged but living in Germany I started running more often. I think it was good headspace to accompany the thrill and exhaustion that comes with living a whole new life in a different language. In hindsight I must have got pretty fit because in my memory of running on this particular day, I feel like I am literally flying. I can close my eyes and I’m back there in an instant, soaring.

Back in Australia I occasionally jogged but I got busy with finishing high school and all the extra-curricular activities I was involved with. I should point out NONE of these were even vaguely sporty. I had always been the chubby very un-sporty kid from an un-sporty family. At the same time, my scoliosis that had been diagnosed at 14 had progressed and every heath professional I came into contact with insisted running would be TERRIBLE for my back. My parents and I said no to possible scoliosis surgery when I was 14 but it was always on the cards and I was convinced running would make things worse. So I didn’t run at all in my 20s or 30s.

In 2014 I came across Operation Move online. I was turning 40 that year and had two young kids. Even though my scoliosis was really severe by now, I had never forgotten that feeling of joy and freedom I had experienced running in Germany. I tentatively enquired about joining Learn to Run, explaining that I might have to drop out if my back hurt too much. I made it through Learn to Run and my back coped fine. But I still kept hearing the words of the physios and surgeons who insisted running was the WORST thing I could do. So my running stalled. In 2009 I had travelled to the US to learn the gold standard physiotherapy treatment for scoliosis and I still religiously do my physio exercises for 40 minutes almost every day. It’s the only way I keep my pain under control. But despite my dedication, my back continued to get worse. In late 2016 I had appointments with the best adult scoliosis surgeons in Melbourne and we agreed the time for surgery was close. They were willing to ‘give me’ a year, since I still had such high quality-of-life, but I knew time was running out.

So I essentially decided ‘to hell with it’ (that’s the polite version). I figured if I was going to have to have surgery soon anyway, I should do what I love and do a ton of running! I wanted to find out what I was capable of. Once I have surgery (full spinal fusion), I’ll never be able to run again. The real push came from the fact my eldest brother Rob (who is an incredible and experienced ultra runner) was turning 50 last year. My other brother Mike (who already had a marathon and 50k ultra under his belt) and I decided the best way to celebrate his 50th would be to run a race with him. So we agreed on the Brisbane Trail Half Marathon in May 2017. Not such an un-sporty family after all!

At the same time, a girlfriend and I decided to run the Forrest Half Marathon in June together. By the time May arrived I had run half marathon distance twice in training and figured I had nothing to lose. I’m not sure what convinced me 25km with 1,094m elevation gain was a great idea for my first ever running event (no, I had never even done a 5k fun run before!). It took me 4 hours and I could barely walk the next day, but I loved it. My friend Carryn and I adored the Forrest Half and made a fabulous girls weekend out of it. I also got to meet wonderful Op Mover Jane in Forrest. In all, I ran seven races last year, from 10k to half marathons, a mix of road and trail.

Another highlight was the Melbourne half marathon in October. Not only did I get to finally meet Zoey and Kirsten and a bunch of other amazing Op Movers, but my dream goal became reality. A sub-2 hour half marathon had seemed way too hard. But with Zoey’s belief I could manage the pace and my brother Rob reminding me ‘you’ve put in the training’, I made it! With all of 20 seconds to spare ;).

In February this year I went back for new X-rays and to see the surgeon. I 100% expected to find out that my scoliosis had continued to worsen, probably faster because of my age and running. I assumed we would be talking timing and logistics of surgery. I was petrified. Instead, I found out that for the first time in more than a decade, my curves hadn’t progressed at all. I could hardly believe it. The surgeon told me to keep enjoying my life and come back in 2 years.

I still have severe scoliosis. If you look at this ‘S’, that’s not far off what my spine looks like. For those in the know, my Cobb angles are 65 and 49. At some point, age and gravity are going to catch up with me. But right now, I’ve been given the most wonderful reprieve. Most of the people I know of with scoliosis anything like mine are on permanent pain medication, disability pensions and are really struggling.

I am grateful beyond words that my life is so different to that. I have a very full-time job I love, amazing kids I get to spend a heap of time with because of my flexible work hours, I talk science on the radio every week, write a blog, sing in a choir and run five times a week. So much joy! These days, when I look in the mirror, instead of seeing the twisted spine that used to make me feel awful, I see a body that is strong and can run a long way. And I love what I’m modeling to my kids (who happily see themselves as very sporty).

I don’t know how much longer I’ll be able to run for, but every time I head out the door I feel immense gratitude. Regardless of when I have to stop, I never thought I would still be running now. Every single run is a gift. I have to admit to major anxiety about how I’ll cope physically and mentally when running is no longer an option – it’s now 30 years since surgery was first proposed as a possibility. But I’m putting that down as future Jen’s problem for now. In the meantime, I’ve got some goals to smash. At the top of my list is my first full marathon in Melbourne in October. I never dreamed I’d be attempting a marathon and I’m so grateful to Operation Move for getting me here.

The Op Move Sisterhood is extraordinary and brings me so much joy. I love seeing us all achieving our goals, but also sharing candidly the hard runs and tough days. Running, and being part of this community, have changed how I see myself and what I believe I can do. I’m counting on this new self-belief to get me through whatever challenges lie ahead. Thank you Zoey, Kirsten, every Op Mover and my wonderful husband, kids, brothers and parents for being so supportive and encouraging.

Previous Post: « Planning your week for maximum impact on the things you care about
Next Post: Podcast: Episode 82 – Love Your Before »