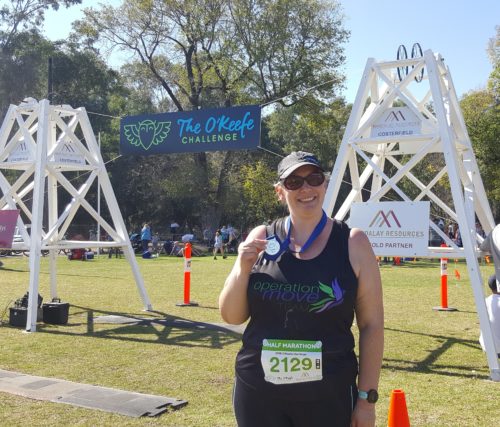 Bec is an active and valued member of Run Club, the Operation Move Community and is a Roller Derby skater. Bec originally shared her story in Run Club and it is reprinted here with her permission.

When I was 7 I found myself on the interschool cross country team (everyone who put their hand up got on the team). I came second last, had a tantrum and pretty much refused to run from that point on. I grew up in a family who didn’t really play sports – brief attempts were made at basketball and dance classes, but I wasn’t instantly good at them, so I lost interest pretty quickly. From the age of 16 I put on a bunch of weight and being active was just not a real priority for me.

Until I found roller derby 8 years ago, just before my 30th birthday. Finally I had a sport that was so awesome that I was willing to push past the fact that I was pretty terrible at it, and just keep trying. Roller derby got me more interested in general fitness and when one of my team mates told me she was going to run a half marathon I just thought she was the best thing ever.

About 6 years ago, I got word of parkrun and that it was starting up in Victoria at Albert Park and I dragged my husband and some colleagues along. Turns out they could all run quite well. But I ran 5km non-stop for the first time that day and even though in those early days of parkrun when there was no walkers I pretty much always had the tail runner hot on my heels, I felt pretty great about getting out there and giving it a go. I dabbled in a couple of other events (a 5km and a 10km) but I never did any running outside of events. Just “going for a run” wasn’t something I did.

5 years ago we moved to Bendigo and there was no parkrun, so that was the end of my emerging running career, until my husband and some other local runners got it going up here. At the start of 2016 I starting pushing a bit harder at parkrun, picking up 5 consecutive PBs in a row. Feeling good, I signed up to do an Ekiden marathon (7 team mates each doing legs to cover the marathon distance) with some of my roller derby team mates, most of us not really being committed runners. We came dead last (by a lot), but had a great time. And it got me thinking that maybe I would like to be able to run 10km.

In July that year my husband and I were in Europe on our honeymoon. In each new city we arrived in, he would get up early and go for a run and get to see a side of the city that was closed off to me. Before we left our final stop in Prague, I had signed up to with Operation Move, with the aim of running 10km at Melbourne Marathon Festival. I had come across the Op Move podcast and been listening to it at the gym and it sounded like the kind of support network I needed. I decided to take some time off roller derby and focus on running instead.

Turns out I had underestimated my abilities – I hit my 10km target in 6 weeks and pushed on to complete 2 x 15km events before the end of the year. In the post-race afterglow of my first 15km event, I entered the ballot for the Berlin Marathon with my husband and his brother. We got in. Suddenly, my 15km needed to be 42.2km. But I had 9 months. I figured if someone can grow a baby in that time, I could run for a few (or a lot) of hours. I ran my first half marathon at Wangaratta in Feb 2017, and whilst I was pushed to my limits that day, I felt like a marathon was not out of reach in 6 month’s time.

A few more half type events through the first half of 2017 taught my some valuable lessons, and at the end of June I was in taper week for Gold Coast half, with my marathon training plan ready to kick off when disaster struck. I rolled my ankle in my driveway at home, tearing ligaments and ending up in a moon boot for a few weeks. Goodbye marathon training. No running for 6 weeks meant that there was no time for me to do the training required to do the marathon, and come September 24th I was standing on the sidelines in Berlin, playing support crew for the rest of my team. I had a great time, seeing some of the best runners in the world and cheering on other Australians, but when I saw the steady stream of 6 hour plus marathoners, I was a little bit heartbroken.

On the positive, I had healed up enough that in every city we visited on that trip I was able to get out and do that early morning run around the city that I had dreamed about last time. I was back on track and refocussed my goals on the half marathon at Melbourne. I ran a PB that day and got to spend some time with more of my Op Move Run Club friends for the first time face to face.

For 2018 I set myself some new goals. I’m playing roller derby again and trying to juggle that with running. My running goal is to complete half a dozen half marathons for the year (Wangaratta, O’Keefe, Gold Coast, Run Melbourne, Shepparton, Melbourne Mara). I don’t really have any time goals, just to be able to run them comfortably and still be able to function afterwards. I want running to keep being a fun thing that helps me celebrate what my body is capable of. So far, I have ticked off the first 4, though an awkward fall at derby training has possibly ruled me out for Shepparton. Have got my fingers (and toes) crossed for a speedy recovery!

I have met such amazing people through running – both through Operation Move and in my local community, and it has helped me to form deeper bonds with people I know through other ways, that are runners too. I get really excited anytime a friend asks me for running advice, when they recognise that even though I’m a back of the pack runner, I still have knowledge to share. It makes me all warm and fuzzy when someone tells me they have decided to give running a go cos they see how happy it makes me. Running has given me confidence and reiterated that I am strong and determined and that hard work delivers rewards.