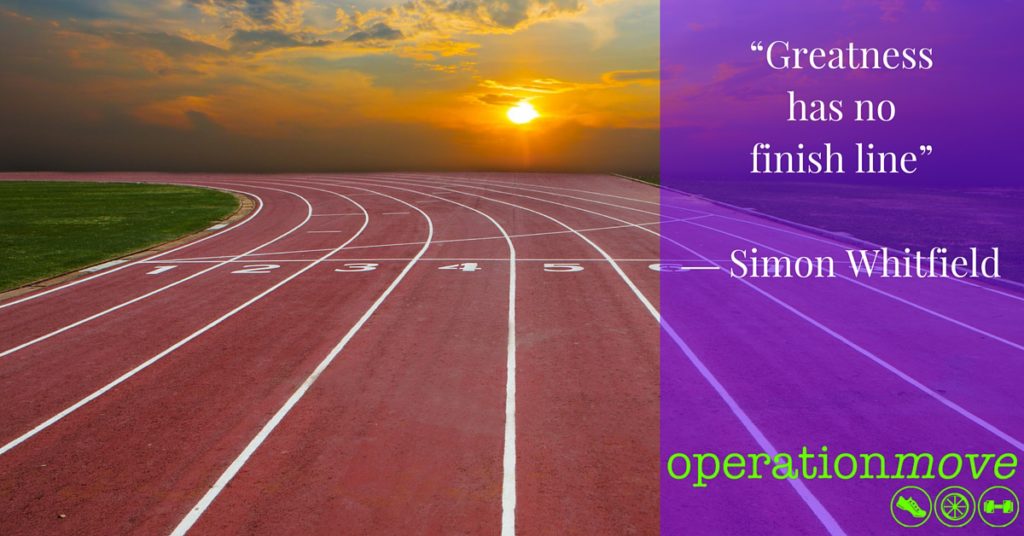 A while ago, I was at CrossFit Kids attempting to entertain my then five year old (Piper) while Riley (who was 8) did her class. Piper was almost at the stage where she could join in, but still lacked some of the focus required for a whole class. So I split my time in between keeping her out of trouble for 45 minutes and checking out what Riley was up to. Trust me, keeping Piper out of trouble for 45 entire minutes is challenge enough.

At a certain point as they were going through their workout (so many burpees!) I noticed that Riley was coming last. By the time her group had finished she still had a few rounds to work through. The best part about it was seeing her one-pointed determination. At no point did she pause, or hesitate or think about stopping until she was done.

But later on, she was upset by it. Coming last. Which is something I know a fair amount about. I came last at pretty much any sporting event in school. I’ve come last in races. And I’m always last at CrossFit. Always. I’ve had plenty of time to think about where that sinking feeling in the pit of your stomach comes from. I don’t think it’s necessarily because you feel badly about yourself, or even that other people will think less of you. I think it’s that deep-rooted fear that you don’t really belong. That is probably the hardest feeling of all.

Finishing last tells you less than nothing. It’s easy to internalise being last as some kind of performance critique, but in reality it is meaningless. It is not a measure of effort, or progress or commitment.

It is confronting. At CrossFit, in particular – coming last will put you in the spotlight because people who have finished will cheer you on. Which is awesome. But it is also really confronting in the beginning. In the beginning you feel exposed and uncoordinated and sometimes you want to disappear into the floor. I don’t feel that way anymore, because I’ve been there long enough to receive that encouragement as it was intended, but it took time.

Belonging has nothing to do with where you finish. Communities are built on a shared passion, not a shared finish time. People bond over shared efforts, shared experiences, shared struggles and shared victories. You don’t need to run a sub-20 minute 5km to know the value of hard work or the joy of progress. And that elation you feel when you PB your 5km run and break the 40 minute barrier is exactly the same elation someone feels when they break the 20 minute barrier. The hard work to achieve it were the same, the challenges were the same and the sacrifices were the same.

Don’t let someone else’s opinion, dull your achievement. Sometimes people ask me what my marathon or half-marathon time is and sometimes they are impressed and sometimes they are deeply underwhelmed. But they weren’t there when I did something I thought I could never do. They weren’t there when I dragged myself out of my warm bed to run fifteen hill sprints. FIFTEEN. Their reaction to my achievement is nothing to do with me. My achievement is mine and how I feel about it is mine too.

Having the courage to start is more important than where you finish. It takes a whole lot of bravery to walk out that door and start running. Outside. Where people can see you. It’s a really big deal. Starting says something about you – how many minutes or hours doesn’t say much of anything at all.

The next morning I was driving Riley and Piper to school. I’d gone to CrossFit that morning for a 6am class.

“Guess who came last at CrossFit this morning?

She cracked a huge smile.

Then she laughed, delighted.

Previous Post: « How to write your own training plan
Next Post: How to rehab shin splints (and keep running) »