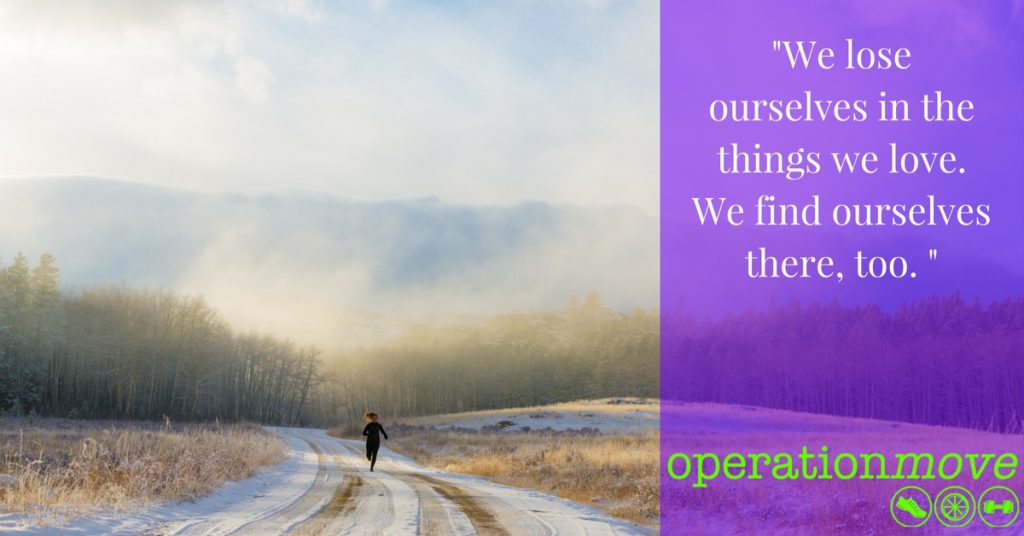 I wrote this after a week that was particularly crappy and it got me thinking about how to deal with those weeks. Because they can really throw you off centre.

The pesky thing about crappy weeks is there’s usually not a whole lot to point to that makes them crappy. Sure you could point to one thing like the mortgage broker giving you the run around because self-employed money isn’t the same as working-for-the-man money. Self employed money is more like monopoly money, really. Which is ironic because I could definitely buy a house in monopoly. In the scheme of things it’s not that bad, but it knocks you around way more than it has any right to. Or it could be the marathon taper getting to you, but it all just seems a whole lot bigger than the sum of its parts.

I know this feels counter-intuitive. I’m sure if I just list all the ways I’m grateful for how blessed I am, I will feel heaps better. On that note: why do only women do the grateful thing? I feel like it’s a throwback to subservience, but I digress. Feel crappy. It’s ok, you won’t feel like this forever, but right now it’s your feeling and you need to feel it. You might feel particularly crappy realising that you still need to feed the children every night. Every night does seem a bit like overkill. Or because you are tapering you might look outside where you could be running or look fondly at your weights and feel crappy about doing nothing.

Second step. Ride it out and cling to your routine.

Look I understand the temptation is to form an even more permanent bond with your doona, but routine is your friend. Admittedly I was a bit lacking on routine because there was very little activity on my schedule last week, but I was so tempted to just skip the two runs that I did have, but I dragged myself out of bed. Runs felt awful mostly but being outside was nice. Keep doing everything that I normally do because I’m going to feel crappy either way, I might as well be productive as well as crappy.

OK. Garlic bread might not be your thing. But my ultimate comfort food is potato soup and garlic bread. I made a batch of soup with cauliflower in it because I’m literally at the point of hiding extra vegetables in the hope that they might ingest some identifiable nutrients (one of them did). And then I got a loaf of sourdough and made up garlic butter with fancy butter. It’s hard to feel crappy when you are eating soup and garlic bread with fancy butter. Incidentally, carbohydrates and in particular potatoes are great stress relievers. So two birds, one stone there. I’m relatively certain fancy butter is also a stress reliever.

I do this by putting enough garlic in the garlic butter that no other human excepting myself will eat it. Then I have comfort lunch sorted for the next day too.

Fifth step. Go do your thing.

Your thing might not be running. It might be something else. But you have something that will remind you who you are. You could feel lost, you could feel found. They could be the same thing. But usually it’s enough to remind you that nothing lasts forever, not even a crappy week.

Previous Post: « Here, I fixed your quote for you
Next Post: Just because you can run a marathon doesn’t mean you should »