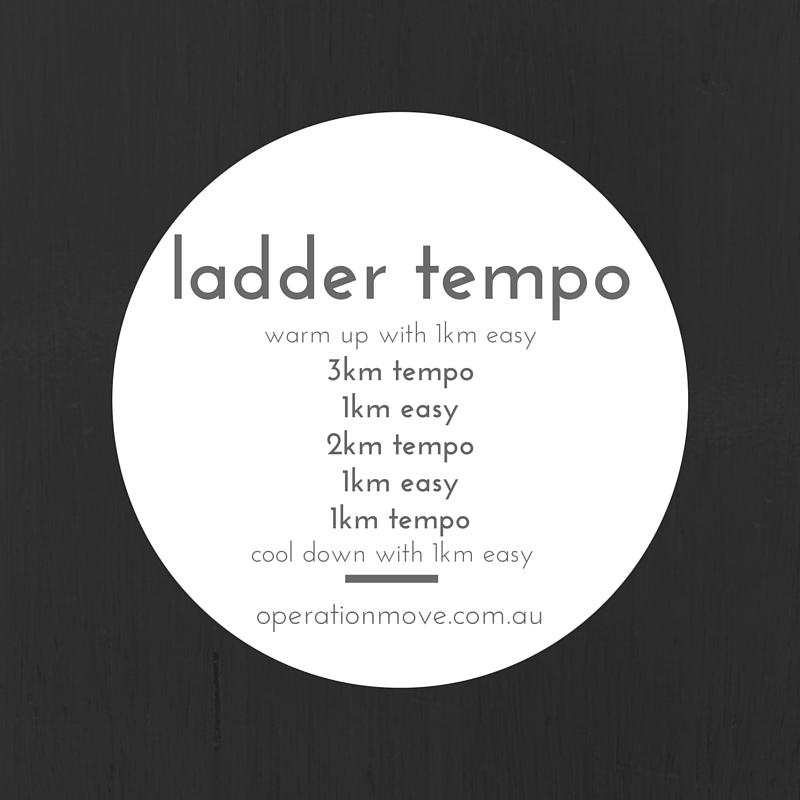 All up this is a 10km run, so if you aren’t quite ready for that yet you could change it to:

And that will be a 5km run.

Most people tend to think about tempo as an all out effort, but you don’t want it to be too hard. If you can’t talk, it’s too hard. If you can only blurt out the occasional word, it’s too hard. If you feel like your chest is about to explode, it’s too hard. The idea of tempo is that it should be controlled, it should be just under the threshold were your body starts to create lactate. In terms of effort – if you think about a light recovery jog as 60% effort, and easy running at about 70% effort – then a tempo is at 80%. Which is often referred to as your 10k race pace. But it’s really much better to go by feel. To give yourself an idea your tempo pace will usually be about 1:00 min/km faster than your easy pace. But everyone is different, so the main thing is to find something that is controlled and really just sits on the edge of being comfortable.

You can also use this workout as a tune-up for a 5km race. Because it allows you to test yourself at race pace for 5km, while giving you recovery periods in between.

Running coaching is available through our Far and Fast programs, or you can sign up for one of our custom plans. 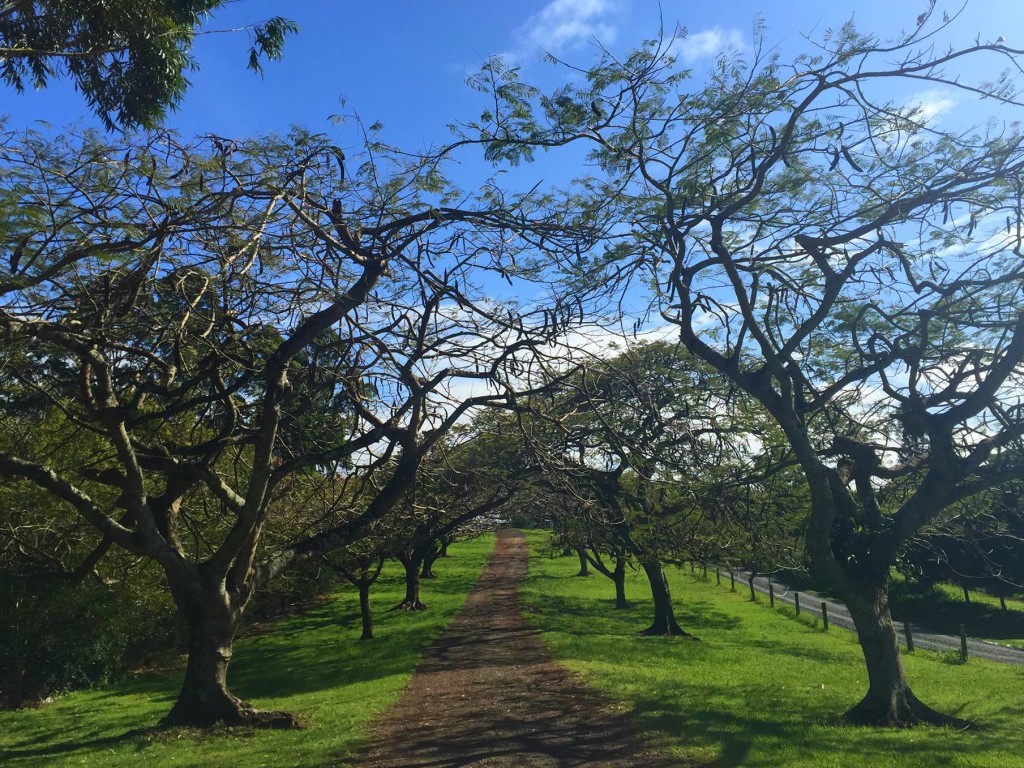 In case you are living under a rock and haven’t noticed my incessant whining about it, I’m tapering.

For people who don’t know (sweet innocents!) it’s the part where you start to scale back on the amount of running to rest up your body to prepare for a race. And it makes people freaking crazy. I was explaining it to my husband the other day and he was asking ‘WHY? (there were probably more expletives in his head) Do you feel like you want to run more?’ And that’s really not it. I’m actually really enjoying the not running.

And that’s what makes you crazy, not the lack of running.

So this week I have:

1) Bought absolutely ridiculous things that there is no way that I will ever need
2) Eaten pizza like it was a sandwich. Numerous times.
3) Had samosas for breakfast
4) Spent roughly five hours going over previous split times in other marathons
5) Changed the shoe that I’m going to run in. That seems like a good idea.
6) Checked the weather for the 18th. I’M SERIOUS.
7) Generally annoyed about 99.9% of the people who know me.

In what can only be considered perfect timing, I’m going away for the weekend. There will be more shopping and more eating, but hopefully slightly less obsessing and I can likely reduce my annoyingness by I think 60% at least. 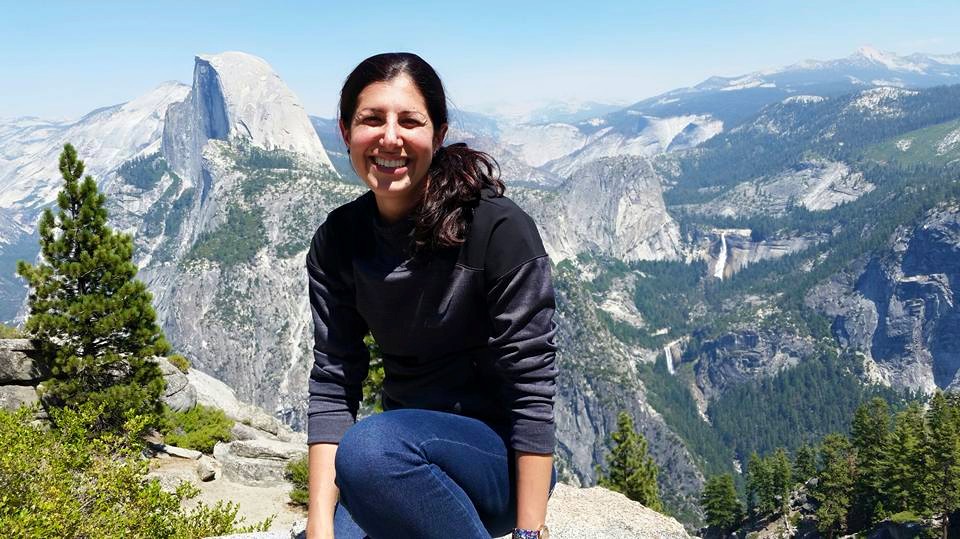 Have you ever had a proper Love/Hate relationship? I don’t mean the kind where you secretly adore annoying a person or flirt fight with them. I’m talking about a full-blown “when I’m with you I’m giddy but when you’re not there I can’t fathom the idea of spending a second more with you”.

That perfectly described large chunks of my relationship with running. I was never a sporty child or teenager. I was uncoordinated, clumsy and worst of all on the list of any teenager’s perceived sins – I was medically categorized as obese. So when I first took up running years later, I had decades of mental conditioning to break free from.

At first I wouldn’t even leave the apartment for fear some stranger would judge my particularly pudgy frame, wobbling up the street. It helped that it was the middle of a brutal London winter so there wasn’t anything too strange about hauling a rented treadmill up the world’s narrowest flight of stairs. I spent hours staring mindlessly at the books on the shelf in front of me while I put myself through so much running-based torture. I can still see the titles now.

I put myself on a dangerously calorie-deficient diet for months that saw me drop so much weight I became skeletal. But still I refused to run outside without the comfort of cargo pants and a baggy t-shirt. I was the whitest gangsta runner ever. Baggy-jeaned kids had nothing on me.

There were no rest days and no way I would allow myself to eat three meals unless I’d worked out at some point that day. Running was purely a means to an end. I could shop wherever I wanted without the fear that I wouldn’t fit into anything or that the assistant would judge my size.

It was tiring. I hardly had the energy to get through the day, so how did I expect myself to last through an entire 45 minutes of intervals?

For every minute of “happiness” I got from the change room mirrors, there were countless hours of self-loathing. Of hunger that tied my stomach in knots and kept me awake at night. Of worry that it was only a matter of time before I went back to my old self. Of tears, self-doubt and the awful crushing feeling that I would have to exist in this food-deprived state for the rest of my life.

Looking back I can see all the hallmarks of an eating disorder but at the time I thought that was how all women kept their weight “under control” (as if it’s a monster just waiting to break free) and that eventually being skinny would make me happy. It didn’t.

And so I hated running. Every single second was a struggle. My body was asking for rest but I didn’t respect it enough to give in. I was fast and I didn’t give up back then, but I never really appreciated it. I ran long intervals and I ran them at a pace that I shudder at the thought of today. I used anger and hatred as my fuel. I was my own drill sergeant and I wielded my perceived weaknesses like no other.

Eventually I broke. It took about eight months but there was no going back once the floodgates opened. I moved back to Australia and stopped running because it bookended a chapter in my life that I was perversely proud of in some ways but also extremely ashamed to admit to.

I had caved to my own pressure and someone else’s standards of how I should look and what should make me feel good about myself. I still get an awful feeling when I think about it.

Then Operation Move came along.

I’d seen it pop up in my Facebook feed through a friend, and was always curious but was never confident enough to join. I’d been through a harrowing few years in the meantime that ended in the decision that it was time to focus on a small goal to get myself back on track.

Naturally I chose the easiest goal I could think of… run a half marathon. Yes, that was sarcasm.

I tried two months of training on my own but those bad memories haunted me and I just couldn’t sustain it. Eventually I signed up to Operation Move’s Event Training course and I fell in love with running.

I’m not saying that it was easy, but it was the polar opposite of what I’d experienced before. I owe my health, my complete change of attitude towards exercise, my self-worth and so many moments of happiness to Operation Move, its founders and every single one of the lovely women who supported and inspired me, just by being there.

There’s a lot to be said for the camaraderie that Op Move provides. Of feeling accountable to a group of people who sometimes get their motivation from you. Of seeing the child-like joy that reaching a goal brings to others and to yourself. Of that feeling of REALLY belonging somewhere.

And of having a coach who understands the journey and who is never disappointed when you miss a training session. Zoey always works with you to sort out why you couldn’t lace up and get out there, and how your workouts can fit into your lifestyle and schedule. She’s a coach who hears your goals and finds a way of getting you there, even if those dreams seem completely impossible or out of reach.

There aren’t enough words to describe how much I look up to Zoey and how her optimism, sense of humour and sense of belief in me, have completely changed my view of running.

I looked forward to it, I wanted to smash my next goal, but most of all, I just wanted that uplifting feeling of doing something for myself that I loved and was finally good at.

That’s exactly what I got out of Op Move. 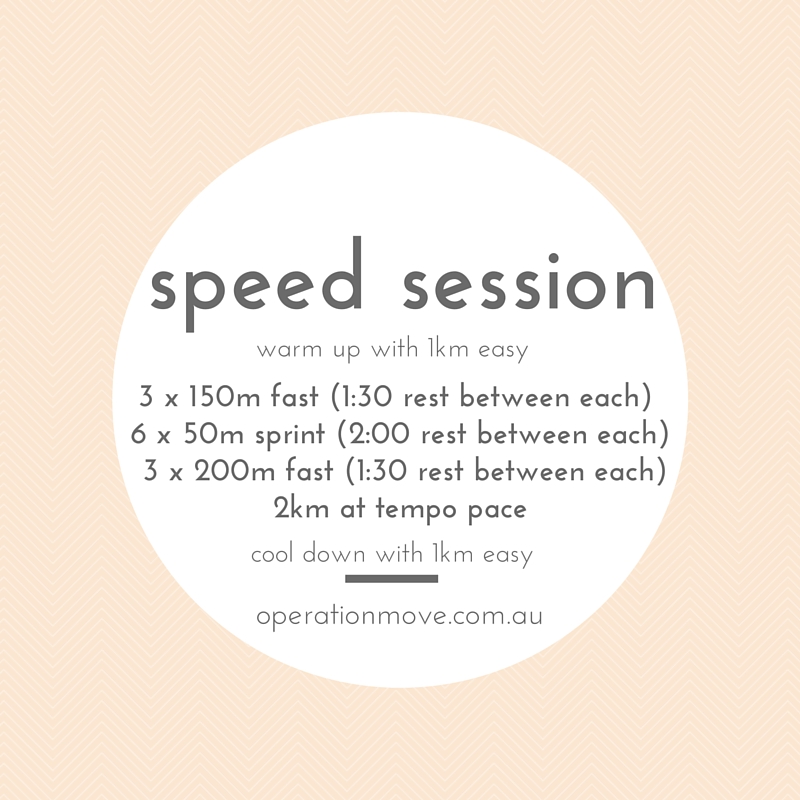 And if you are thinking hang on aren’t they ALL SPEED SESSIONS? But true speed development is very different from speed work. Things like tempos and intervals are great to improve your speed and endurance and stamina – but to get faster you also need to work on your absolute top speed – which is done over much shorter distances. Which is why for speed development you actually rest between the repeats, rather than walking or jogging your recoveries. It’s great if you can do this somewhere you won’t be bothered by traffic or hills. I do most of my repeats either around a large block which is pretty level or on the path in the park. It helps to remove as many variables as you can!

Running coaching is available through our Far and Fast programs, or you can sign up for one of our custom plans. 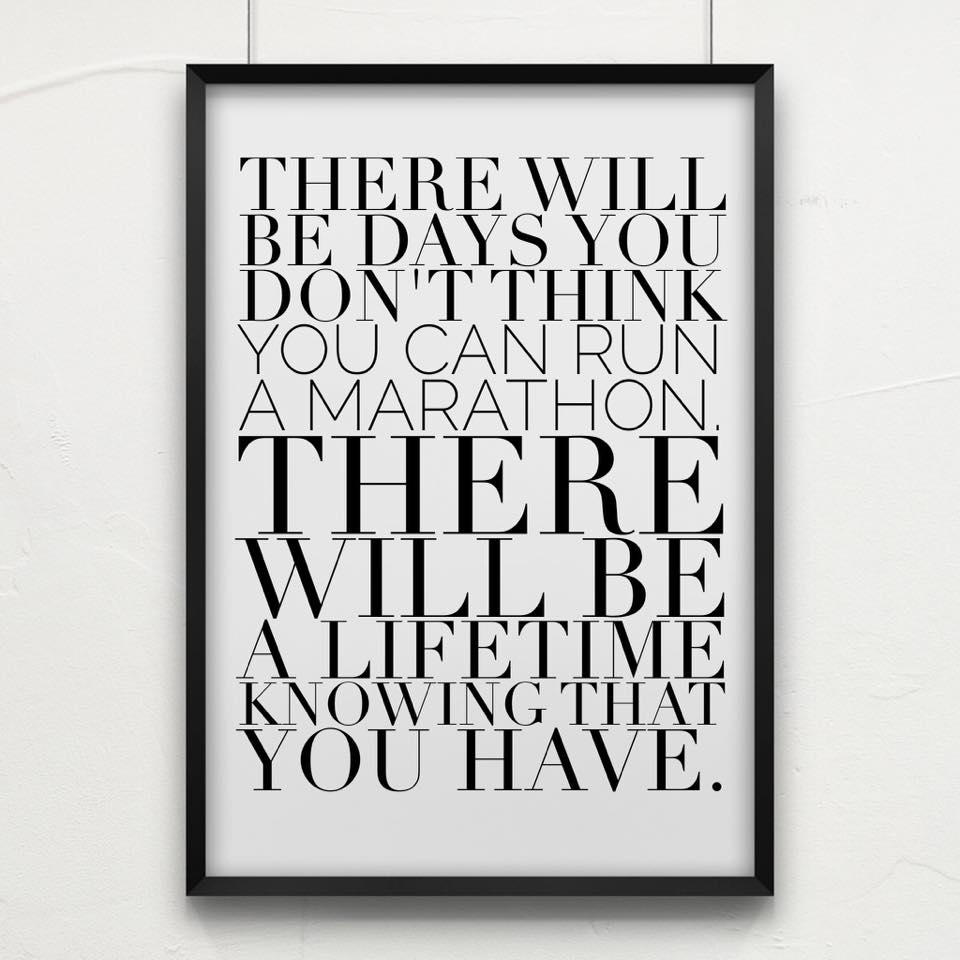 31 days out from the Melbourne Marathon. I’ve already started tapering because I’m doing a long taper. So I’m still running 70+km this week but the long runs are getting shorter, the easy runs are getting shorter and even the speed work is getting shorter. The surge of energy hasn’t quite kicked in yet. I’m waiting for that to happen. I’m at the I can’t possibly do this stage. It’s too hard. It’s too far. Only a mad person would volunteer to do this. FOR FUN. I run at marathon pace and can’t even conceive of holding it for so long. It doesn’t seem remotely possible. And I’ve got no excuses because I’ve run every session in my training cycle, six days a week for the last 11 weeks. Which creates a sizeable amount of pressure on the day.

I’m plagued by things like – should I pick an aggressive pace or a conservative pace? What happens if something goes horribly wrong? What happens if I put in all that training and the result is disappointing? Why is there a hill at 36km what demon of geography would do that to me? What if I’m actually incapable of maintaining the mental strength to run on my own and fall apart like I did in the 50km? A thousand million doubts that swirl around.

I know where the weak spot is. And it’s about 18km-24km. The point where you are saying WOOHOO! HALF WAY. And then HOLY CRAP. ONLY HALF WAY. In many ways I’ve had the perfect training lead up. I haven’t been sick. I haven’t had any injuries. It has all gone, pretty perfectly. Which is totally freaking me out.

But really, that’s just all the crazy head games that happen as you edge closer. I almost have to convince myself that I can’t do it to get into the head space to prove to myself that I can. And what is the goal? Sure I have a time in mind but that’s not the real goal. The goal was always to find how far I could push my limit. And one way or another I’ll find out.