Winter is hard for the getting out of bed in the morning. Even here, in the land of no discernible Winter it’s darker and a bit more chilly. And the bed is warm. And it has a doona and good smelling snuggly children in it. Seriously, why do kids smell so good when they are sleeping? Is it some kind of parental hormonal thing to make sure that when they are awake and you are into your fifth hour of whining you are all stocked up on love from the good smelling sleeping part? 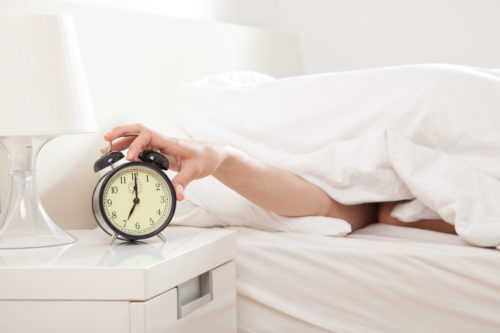 2. Have your clothes ready

The less decisions you have to make the better. More choices mean that you are more likely to feel overwhelmed. So have your clothes all ready to go so that’s one less thing you have to worry about.

3. Tell someone you are going

Facebook is forever. Sure, you might not want to get out of bed for your own benefit but if you’ve said you are going to on Facebook, you really have to, right? You can do it in our group!

4. Have a reward system in place

Like a delicious coffee when you finish. Mmmmmm, coffee.

6. If you are a habitual snooze button presser, put your phone somewhere in the room where you have to get out of bed to turn it off.

And once you are out of bed, might as well go for a run, yeah?

7. Lie to yourself and tell yourself you’ll just go for a walk.

Once you are out there, walk if you want, but might as well go for a run, yeah?

Need a bit of extra help?

Sign up for Learn to Run or pop over to our community group for some accountability and support!

I have about five pairs of skinny jeans. They are in a box in my garage. They are in the same box as my maternity clothes, because in my mind I am equally unlikely to use either of them ever again. But they sit there, just in case. I removed all of my skinny jeans from my wardrobe ages ago because it was a bit too depressing to have nice things that I couldn’t wear staring back at me.

In 2011, I started to run. So this has been a three year journey for me. In 2012 I started to run outside. In 2013 I ran three half marathons and in 2014 I stopped drinking and smoking and started CrossFit.

Some of that journey was a natural progression and some of it was a conscious decision on my part. For some time my goal had been to get to a better race weight and to really see what my body would look and feel like if I committed to my training.

For me, commitment is investing something of yourself in the process that you can never take back. It means getting up in the early hours of the morning when you are tired or sore or you just don’t want to. It means forging forward even when it feels like your plan isn’t working. It means believing that all of those times when you push through your own resistance are worth it. It means throwing everything at your training until there is nothing left. It means work. And it’s hard. Because it’s supposed to be hard. Change is hard. Staying the same is hard. And I chose which hard I could live with. But you know? I always liked the hard.

The rewards for all of that are far more than you could write down in a list. Really, they have nothing to do with the fact that I got out my skinny jeans this morning and they all fit, even better than they did before. And it has nothing to do with cracking under two hours in a half marathon. Even though I’m so happy about both of those things. And yes, I’m proud of what my body can do and I’m proud of my ability to push myself out of my comfort zone. I’m proud of being able to do something quite crazy and have the fitness that I’ve developed over the last few years carry me through, even when I have no training to speak of.

They are all great things, fantastic things. When I look in the mirror now I see a lot of things. I see the body that gave birth to my children and I see the body that Operation Move built. But there is one thing that is the real reward of all of that work and it is all the hidden pieces of myself that I found in the runner that I became. Sometimes when you push your body to see how far it can go, you discover who you are and you like that person a whole lot more than you ever thought you could.

A really common question once you start running for longer distance is what do you use to keep your energy levels up along the way. Usually, it’s mostly about replacing the sugar that you lose every hour. But depending on who you talk to it might involve a bit of honey and some nuts or it might involve gels or chews or sugar tablets or jelly beans. Really, there’s no science to it. It’s all about trying out different things to see what works for you and what your stomach is going to be happy about as well as your energy levels.

In general, you need 30 to 60 grams of carbohydrate each hour that they are running longer than 75 minutes. But you will need to start before then so your tank isn’t empty. What that carbohydrate looks like will depend on what suits you and it can take awhile to train your stomach and your palate to handle some of the fuel options!

So, I set out to ask some cool people I know what they do for long runs.

“Every 40 mins I have water with a gel and I sip away a lot towards the end. I have Camelbak so it’s hard to say but over a 30 plus k run is probably drink 3-3.5L. At the marathon I drank at every water station. At first just sip or 2 but towards end I couldn’t get enough in”

“I drank a bottle of PowerAde on my 15k run last week and had a couple of half cups of water. That felt about right for the conditions (warm).”

“I drink loads the day before then sips each 3kms (that’s where the taps are). A gel before I left then another Gu at 10 then 14km (for an 18) also had some GF fruit chews that snacked on at 8 and 12 and 16 but not sure if these made much difference”

“I stop at the bubbler at 5, 10 and 15km approx and drink 3-4 litres the days leading up to the run. I run with red frogs still playing with gels and shot blocks.”

“I drink about 3L the day before, and have a bottle next to me in bed and drink about a glass before I leave. I ran 21km the other week with just a few sips of water and zero gels. Same day I smashed my PB by 4 minutes. It was a relatively cool morning so wasn’t thirsty. However on marathon day it was hot and I was terrified of dehydrating so I did my usual prep the day before and had a water and a powerade every 5km and shot bloks every 10km. I felt great hydration-wise the whole way. Personally I think diet and hydration in the few days before is where it counts. That’s what works for me. I’ve only used gels (shot bloks) in a half marathon once and that was just practice for the mara. I have never needed them for that distance. I would probably do up to 25km without them. Honey sachets or jelly beans are enough for me. I take carb loading very seriously ha ha!”

“I only carry my water on 2+ hr runs & the more of these I run the less I’m needing to hydrate. Usually only a honey straw about half way through a long run. And coffee features prominently somewhere in there”

“ I tend to grab for a gel (Gu choc mint) every 45mins on runs over say 15km. Recent marathon saw me take all 6 Gu shots I had stashed – 1 before the race and the rest interspersed, last one had at 38km.

I tried to drink plenty the day before but am naturally shocking at consuming water normally (working on changing that). I wouldn’t normally carry water for anything under 21-25km as my run course is usually around the river somewhere with access to water – it’s also dependant on the heat and humidity.  I am also a new jelly bean convert”

When I started to run I didn’t really worry about times that much. I mean I tracked it in an app, but that was more for the calories burned and as a point of reference for progress down the track too. Which was really quite smart, because now I can look back on it and say wow. The first time I ran 15 kilometres it took me two and a half hours. Now it takes me less than one and a half. And if you are doing the math you’ve just worked out that I was running slower than some people walk.

I always assumed that if I put in the kilometres that my pace would naturally improve as my fitness did. And to a certain extent that was true. I did improve. But I noticed that I didn’t improve as much as other people who started at the same time as me. Occasionally I wondered at how some people were just naturally faster than me. But then, it only looked natural to me. I had no real idea about their training.

It actually wasn’t until the end of last year that I developed anything resembling a training plan. I mean I had a training plan for my half marathon efforts but that was mostly about building up my long distances, there was no real structured interval, speed or hill sessions. So I sat down and figured out a 12 week training plan for improving my speed, particularly over 5-10k distances. To be honest, I didn’t think it would be overly effective. I was just naturally slow, right?! Not built for speed.

Well I was wrong.

What is that cheesy saying? Don’t be disappointed with the results you didn’t get from the work you didn’t do. Well it’s true. I could have sat around wondering why I was so much slower, or I could put in the work to get myself from point A to point B.

Really, I have little interest in speed for speeds sake. I have an interest in long distance. But for me to run the furthest I could go, I have to run faster. Running faster is going to make those really long distances achievable.

It does require a little bit of faith though. You have to commit to your training. You have to invest in it. You have to show up when you don’t want to. And you have to believe in it, even when your progress is minimal to non-existent. And if you do all of that, who knows where you might end up? You might end up somewhere that you’d like to be.