You are here: Home / Moving / This is Learn to Run: Helen’s Story

It is such a pleasure to bring you Helen’s Learn to Run story. There’s no greater power than investing in yourself, every day. Even when you don’t feel like it, even when it’s hard. And along the way, Helen inspired so many other people to do the same. It was such an honour to see her progress over the three months in Learn to Run and to see her continuing to build on what she achieved in Run Club. 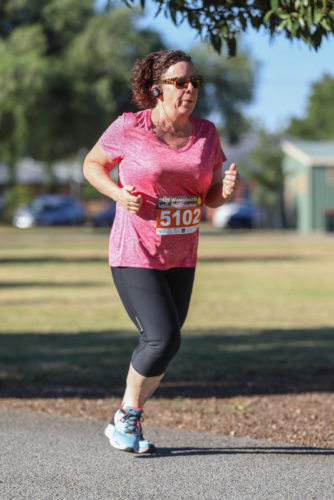 I’m an “it’s better than the alternative” runner.

My running journey started back in 2013, overweight and unfit I signed up for the 12 week challenge at the gym that I had joined. The hook that got me in was training to walk a local fun run; hills, 11km, fire trails.  I seriously underestimated what was involved, and that very first walk I was hanging on to trees to stay upright trying to catch my breath. If it wasn’t for the fact that my car was at the far end I would have turned around and gone home.  10 weeks later, event date rolled round and I’d done 9 training walks. I knew I was fitter because when I got to the top of the hill it didn’t take anywhere near as long for me to get my breath back and on the day of the event I finished 34 minutes faster than the very first walk.

After that event life went back to what it had been, and next thing you know it’s 12 months later and I’m signing up for another 12 week challenge in pretty much the same spot as where I’d been a year earlier.  This time I set a time goal for the fun run that meant I had to do some running on the flat sections.  Somewhere in the next 10 weeks of training I realised that I didn’t mind this running thing; I didn’t love it, but it was way better than doing burpees or TRX rows – not that there is anything wrong with those things, I just really really don’t like them.

From there I moved onto parkrun. I loved it and worked my way up to being able to run the whole 5km.  Somewhere along the way I tried to leap from being a once a week 5km runner to a 10km runner and collected myself an injury although I didn’t have a clear reason why. I couldn’t tell any of the health practitioners I consulted what I’d done, there was no I did X and now Y hurts.  I tried to keep running, but things weren’t improving because I was treating the symptoms not the cause, and this was the start of a slow downhill slide to long periods of no running.  With hindsight, I know now that I just tried to do too much too soon and too fast.  One thing I did learn was that I’m pretty much a 5km girl who’s prepared to step up to a bit of a longer distance for special occasions.

Eventually my injury led me to a local physio group with a clinical Pilates class and a fiercely persistent massage therapist. It wasn’t a quick fix, but after a couple of program cycles I stopped worrying about my symptoms returning and started to think that maybe I could try running again.  I had some intermittent attempts to start again but never had a proper plan or a clear goal so each time I would fizzle out and give up. And I’d still be at the same point as when I very first started, overweight and unfit.

Around this time advertisements for Learn to Run started appearing in my Facebook feed and in the ads that google tossed at me, I guess because I had googled Couch to 5km apps. I ignored them at first but these things can be a bit persistent and niggle in the back of your head.  I was a bit interested. The idea of having a plan to follow was really appealing, but I was going away on a holiday and wouldn’t be able to finish if I signed up for the advertised program.  I sent Zoey an email to find out when the next program would be, and discovered I would be back from holidays just in time; and even better, Zoey followed me up with an email a couple of weeks before the program started.  Personal contact is so much better than just downloading an app.

Learn to Run was absolutely what I needed. There was a clear plan for the week, and explanations about why there are differences in the plan across the week.  The Monday check in and posting each of my sessions was great accountability that I would never have found had I gone down the Couch to 5km route.  Knowing that there were others having similar issues as I was (why can breathing be so hard!) actually helped me keep going, and of course being able to ask questions either in the Facebook group or of Zoey directly was fantastic.  I was home from holidays in time to do half of the pre-program walks which I think really helped, particularly going from doing not much to 3 run/walk sessions a week. Even more important was the gradual progression through the weeks.

Of course it wasn’t all roses. There were some days when I really wondered what the hell I was doing, when my huffing and puffing was so bad I couldn’t finish an interval, or when my legs felt horribly heavy. This is when the feedback in Learn to Run really kicks in, because well, sometimes running just sucks and it’s good to have someone to remind you of that, but running never seems to suck as much as burpees do!

Before I knew it, 12 weeks was done, and no injury issues.  As well as confirming for me that 5km is my sweet spot, Learn to Run taught me that I really need to have a goal sitting out there that I’m working towards, and a plan to get there, because I’ll never be the person who exercises just because it’s good for me.  So this year, because being back running is a special occasion, I’m going back to that very first event, 11km, hills and fire trails and I’m pretty excited about it. Sorry, there was a YouTube API error: Daily Limit Exceeded. The quota will be reset at midnight Pacific Time (PT). You may monitor your quota usage and adjust limits in the API Console: https://console.developers.google.com/apis/api/youtube.googleapis.com/quotas?project=895915532369 Please make sure you performed the steps in this video to create and save a proper server API key.